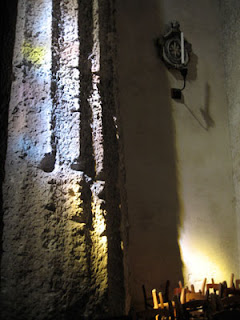 We're back from Sicily. I had planned on blogging the trip as we went. Enough of our friends have traveled to Italy that a few might actually have kept up with our journey. Sadly, internet was a bit dodgy in most of the places we traveled. It was either not there at all, heavily secured, or unavailable even where access was advertised because every building in Sicily has 2' thick stone or concrete walls. Not a wifi friendly place.
It might be for the best. Honestly, as I look over our pictures and think about the trip, it comes off as rather repetitive. Temple, photo of the two of us taken with camera at arm's length, B&B room, Negronis, wine, repeat.

That's not to say the trip wasn't wonderful. It was. It was just... different. When you read about Sicily, you end up reading books that are long uncertain ruminations about what Sicily is. We know what Italy is: "Cradle of the Renaissance", "Seat of Imperial Roman Power", "Seat of Catholicism", the list goes on. You can go to mainland Italy and see the Pantheon, the Vatican, The Forum, the Duomo in Florence, the canals of Venice and you come away feeling like you've seen Italy. You know what it is.  In reality, you're just leaving with an easily managed framing of the place. But that is something to build on.

Sicily doesn't give you that luxury. It has amazing Greek ruins, beautiful Baroque cities, black sand beaches, uncountable photo ops, and with out a doubt, the best oranges I have ever eaten in my life, but little you could look up in Art History 101, little to take a bus to, go home and say "I've seen it".  Its most famous export is the Mafia: a fact they are not oblivious to. I find it amazing that the same city that named their airport after two magistrates who were assassinated in the '90s, would sell t-shirts emblazoned with Marlon Brando. That the profit from those t-shirt sales probably goes back to the "honorable men",  just adds to the irony.

I've taken to quoting Levon Helm and describing Sicily as "an adult portion".  Northern Italy rewards your efforts with sights, tastes and sounds you've read about. Sicily, you have to look deeper, or maybe you don't look at all. I haven't decided. One of the most memorable moments of our trip was a long animated discussion with our B&B's host and husband about American and Italian politics. Agata spoke some English and her husband spoke none so she had the unenviable task of translating her husband's as well as her opinions to us and ours back to him (you try and translate what a "403b plan" is to Italian). At a certain point he just started talking to us in Italian, our nearly complete lack of comprehension of what he was saying didn't seem to make much difference. Nevertheless, we felt, for an hour, a part of the never ending conversation going on in Sicily. You can't take a bus to that.

I'll be posting a few more observations about our trip. I'll try and be less philosophical.