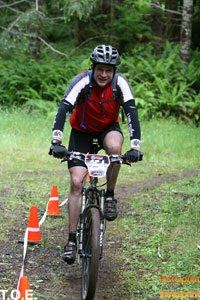 I've spent the last 24 hours thinking about racing, volunteers, failure, and the myth of coming in last.

For those who like to skip to the end - June 20th I did a 50 mile messy, dark, drizzly race and because of a breakdown in communication with the race director and the course marshals at the  lap point, I was pulled from the race by mistake. The marshal assuming I had missed the lap cutoff by three minutes didn't know the race started somewhere between five and ten minutes late so I was actually under the cutoff.

For those who want the backstory - Yesterday I entered the Test of Endurance 50 mile mountain bike race. This was one of those personal goal things. I knew I wouldn't do particularly well. I just wanted to finish, to prove I could do it. I'm 50. It was 50 miles. It was almost a year since my cancer surgery. Seemed a slam dunk for a symbolic personal victory. The race was two 25 mile laps with a four hour cutoff on the fist lap. The assumption is if you can't get the first lap done in less than four hours, your going to be out there a long, long time and would become a liability to support.

I had been training pretty hard for this and in an earlier race on parts of this course, my average speed was 6.5 miles an hour, which should have brought me in with plenty of time to make the cutoff. What I didn't count on was the weather actually being worse at the end of June than the beginning of May. We took off in drizzle which hung on for the day. Despite that, I was feeling great for the first 12 miles. Mostly climbing on fire roads, I was making great time and on schedule to come in around 3:30 on the first lap. Then we started going down on single track. All the descents were nightmare, rutted out deathtraps that even my brother-in-law Joe, who has no fear of crashing, and won his class in this race, was running down instead of riding. My average speed kept dropping, the weather got worse. The pack got smaller and a bit more desperate. The woman I was pacing with thought with 3 miles to go that we might make it. I thought we needed some fast fire road if that was going to happen. Lo and Behold, fast fire road appeared and when the lap station appeared, I still had several minutes to spare.

Except they had put a sign in front of the right turn trail and kept motioning me to go left to the finish. I explained that I was Cat II and they said I missed the cutoff. Carolyn was there looking a bit confused and I told her I'd been pulled. We tried to explain that I was under four hours but they were stopping riders at 1:30. Worse, the aid station, about 50 yards up the road, was chasing the last riders away and denying them food saying they had to leave the aid station by 1:30, which was nonsense. This included the woman I was riding with who made it to the cutoff four minutes ahead of me.

The problem was, disqualification authority was given to well-intended but tired volunteers who didn't race. They were following a set of instructions they were given. The race director needed an experienced marshal at the lap point with a stopwatch synchronized to the starting clock, clear instructions about course closure procedures, and it wouldn't have hurt to have a bit of latitude on cutoffs when a course was as bad as this one was.

So, robbed of my race, I headed up to the finish to chew out the race director. Mike Ripley is a good guy and I wasn't really up for getting in his face about this. I don't do angry well. When I explained what happened he immediately admitted it was a huge mistake and offered to refund my race fee or comp me next year's registration, which was the stand up thing to do, but had the unintended effect of robbing me of my indignation. I really needed the anger at that point. Lacking that, I had nothing but little truths to ponder.

The truth was, yes, I was cheated out of my race, but only barely. Had I been waved on to the second lap, I was looking at a 9 hour race and a lot of bored course marshals. The woman who squeaked through ahead of me finished 8:37. So what was I really doing out there? I spent the whole racing season coming in last to race harder and longer in a faster class. Yes, I probably could have finished it. But I was just a couple minutes out of 240 from the line that says "you're not up to this". And the process of getting to this point sucked most of the fun out of racing for me this year. I knew I was going to be close to last when I set out to do this. What was I thinking? What does it mean to start a race knowing you are going to finish last?

I'm not sure how or when the myth of the noble loser was born. It was probably elevated to it's current level by Stephen Ahkwari's finish in the 1968 Olympic marathon and his famous response when asked why he kept going “You don’t understand. My country did not send me 5,000 miles to start a race, they sent me to finish it.” Well, strictly speaking they sent him to win, but you have to admit, he owned that moment in history and introduced the world to the idea that there could be more to a race than coming in first. After that, it was safe for Oprah to jog a marathon and the rest of us could pile on, cluttering up the field looking for personal bests without having to be competitive with anyone but ourselves.

Still, I have to wonder about entering a race for the sole purpose of having your own Stephan Ahkwari moment. That's not what racing is about. You race to beat other people. Ahkwari entered the race to win, not to drag himself into the arena an hour and a half after the rest of the runners. That's just how his race ended. When I raced Cat III, I was racing with people I was competitive with. I didn't podium, but I was close. That's what a race should be.  Pushing yourself is good. Getting out of your comfort zone is good. Chasing after your lonely moment at the finish line after everyone has left and nobody but your spouse and the race director are there to cheer you home, is something of a contrivance.  I'm not sure it counts as noble.

Will I try again next year? Oh, probably.

Next Sunday is Pickett's Charge in Bend. I'm back to racing Cat III and I'm going to be in a lousy mood. I pity the people trying to stay ahead of me...