One Big Weekend of Cycling 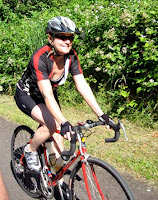 Saturday we loaded up the old bikes and headed for Willamette Mission Park for the start of the B&G ride. We used our iPhone maps to find the park. They told us it was in the middle of a field of hops in the middle of nowhere. Zillions of dollars of technology. GPS connections to satellites.  We're getting telemetry from military satellites and we still got lost! Give me a paper map any day.

We got there late, just in time for the mass start which meant we were pulling up the rear of the ride for the first 40 miles. I kept wondering if I could get pulled from a charity ride. Actually hanging to the back was ok. Less bike traffic and a chance for Carolyn and I to find our pace. Carolyn was riding her 1987 vintage Trek 400. Joe rebuilt it last year and it is beautiful. For people who care about such things, it was made in America, brazed, lugged steel and absolutely perfect. But this was only her 4th time riding it. I was on my Bridgestone mountain bike, also vintage 1987, with road tires. We looked like mutts around all the carbon fiber and hydroformed aluminum but at least we didn't feel we had to live up to our hardware.

The course was a figure 8 with the park in the middle. The first loop went East to the Oregon Garden and back to the park for lunch. The second loop crossed the Willamette river on the Wheatland ferry, went over the Eola Hills into Amity, out to Perrydale and back over the hills to the ferry and back to the park. Definitely the harder of the two loops.  The ride to the Garden went fine. A slight detour in Silverton when we picked up the course markings for a ride the previous week. Had to struggle through ugly downtown traffic but we knew where we were going. We were having some trouble staying together. I'd get out ahead and would try to slow down but would end up just out of reach. We got a bit better on the way back to the park. By the end of the loop we had caught up with most of the riders. Over lunch, Carolyn felt like she was up to trying the second loop so we loaded up with fluids and energy bars and headed out. 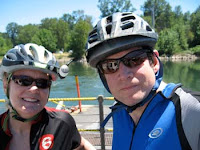 We'd never been on the ferry before. It's a cute little thing. The Willamette is only maybe 100 yards wide so the ferry basically runs on a cable back and forth. Once on the other side, we headed pretty much straight for the hills. It was a short but nasty climb but Carolyn did alright. The nice long downhill into Amity perked her up. We were back in familiar country here. We've ridden these roads on our Sunday rides before. We had a nice flat run to Perrydale and a bit of a breakthrough in riding together. A little out of Amity Carolyn asked if I could slow the pace down a bit. I downshifted and picked my cadence up and it was like magic. I wasn't working so hard but we were going nearly as fast. Carolyn was hanging right on my back wheel and we could talk and keep up a steady 16mph clip. We were passing other riders and not working terribly hard.  We pulled into Perrydale and an aid station feeling amazingly good. The aid station had food and sports drinks and shade from some tents. This is the middle of the Willamette valley and trees are pretty rare. I should have been paying more attention to this but I was feeling so good I let it go. We were only 15 miles from the end of the ride so the riders there were pretty happy and talkative.  Not a huge number of people did the full 75 mile loop so we were bonding a bit over pulling the long miles. The aid station was staffed by a local roller derby club. Roller derby is big in Oregon. That's totally true. We were feeling kind of at home with our old bikes and Carolyn's awesome retro Twin Six Scarlet Skulls jersey.

Out of Perrydale we had to climb back over the hills to get to the ferry. The climb wasn't quite as steep as the first but once on the other side, we kept hitting little steep hills. It was beautiful country, passing quite a few wineries, and the hills were easy for me (triple chainrings, thank you very much). Carolyn did remarkably well but I think I enjoyed the scenery more than she did.  We reeled in a few more riders as we got to the ferry. The ride across the river gave us a chance to talk with the six or seven riders we caught up with. Several noticed Carolyn's bike and were quite impressed with the bike and the fact that she had caught up to them riding it with huge knobby cyclocross tires. We explained the living on a dirt road thing but they were still amazed. The ferry break also gave Carolyn the chance to point out that my legs were sunburned beyond belief. I had put some sunblock on but obviously not enough. I wasn't feeling it, yet. I would.

It was an easy half a mile to the car from the ferry and we both pretty much floated the whole way there. On the ferry we confirmed that we had ridden 80.5 miles, based on our shared odometer readings. We actually had energy left. Carolyn did great. We were afraid this would be a death march but we both felt better than we had on some of our shorter rides. I'm 50. Carolyn is 58 and we are riding like we're half that age.  We thought about the last times we rode distances like this - back in '87 with our dear friend Cathy. I remember all of us setting out on the Ashland Triple Challenge, a century ride that was actually snowed out. Carolyn and Cathy ended up on the news as they changed a flat tire on the very same bike Carolyn was riding today.  Days don't get much better than this. There will come a time when we won't be able to do this, but this ride let us know that that time is quite a ways off.

paulag said…
You both are so amazingly cool, JDP! I am very impressed and totally gleeful that you and C. did this.
The ride - as you've described it - sounds worth your joint effort.