This is a long post and a bit more self absorbed than usual but it's late, I'm in a hotel room in Cincinnati at a web developer's conference and I don't have anything else to do except blather at the screen.

Racing season is over and Fall is really coming down hard. But it finished with a great memory. For those inclined to skip to the end I'll tell you this: Oakridge does have awesome mountain bike trails. The people there are really, really friendly and support the sport, and it really does rain a butt load in Oregon.

Sometimes fate throws you a bone. I was reading Mike Ripley's blog wrapping up his season and he mentioned a couple of endurance races I had never heard of including the Oakridge Fat 55. I'd been spending a good deal of the summer grumpy because I got pulled from the TOE 50 at the cutoff and a little cheated that I didn't get to do a 50 mile race while I was 50 years old. I was so hung up on the TOE that it never occurred to me to go find another 50 mile race. Duh.

I've never ridden in Oakridge despite it's being just a few hours from home. It's supposed to have some of the best riding in the state and this race promised to cover six of the best trails they had. This seemed the perfect opportunity to step up and bag that endurance race. Yes it was 5 miles longer, but the site promoters said it was 1000 feet less climbing than TOE and it wouldn't be muddy. Piece of cake! Sign me up.

The weather conspired to deliver one more glorious day of unspeakable crap. September is generally a very dry month in Oregon but since the planet is going all tropical, all the time, all bets are off. The day started gray, progressed to drizzly by mile 10, descended to steady rain by mile 30 and finished with the kind of downpour usually reserved for countries with rain forests and insects the size of dinner plates. On the plus side, overheating was a non-issue. It was also fairly warm; somewhere in the low 70s. That was a life saver. We were just wet, not hypothermic.

50 or so of us went off at 8:30. The race began in downtown Oakridge and wound up paved and improved dirt roads for 6 or 7 miles before climbing in earnest to the top of the first grade to descend the Flat Creek trail. People were chatty and the course support was great. Flat Creek trail was beautiful and fast.  Oakridge trails are pretty spread out so the general routine was to grind a few miles on pavement, run a fire road up and then crank down the famous trails there. So you had a lot of time to think and suffer in between bouts of really having to concentrate on what you were doing.

I actually felt pretty good the first half of the race. I wasn't in the running but I was still surrounded by riders when I came in to the halfway point where our cars were conveniently parked. I think the one big mistake I made on this race was lingering too long at the halfway point. I blew about 20 minutes reloading the hydration pack, cleaning off the bike, getting some food in me and texting Carolyn to let her know I was halfway through. I think I began to cool down and stiffen up so starting out on the second half went bad as soon as I hit the first major climb; about 2 miles on pavement. I fell pretty much to the back of the pack by the time I reached the top. I had been pounding Endurolite capsules (basically every cramp remedy you've ever heard of in a convenient gel cap - sodium, magnesium, manganese, B vitamins) to keep cramps at bay and they worked, but the cramping, particularly in my calves, was always threatening and I lost a lot of speed babying the muscles. The 9 mile traverse to the Larrison Creek trailhead was much rougher going than it should have been.

The trail was awful. I was still swapping places with a few riders but the cutoff for finishing the race was 4:30 and I was dragging. It was after 3 and I had no idea how long it was going to take to grind through this section. Fortunately the trail got better the last 2 miles and I popped up on to pavement around 3:30. By now it was raining pretty steadily. I flew as fast as I could down the road to the turnoff to the Larrison Peak climb. I had run out of water, which was a bit ironic considering how drenched I was. It hit home when I reached the turn to start the climb. I had to lose my glasses because of fogging and I was getting so much water, salt and oil in my eyes I had to pull over and let them tear up to stop the pain.

If I needed any reminder of how kind the race volunteers were, the poor woman acting as a marshal at the bottom of the climb gave me a bottle of water from her truck to get me up the hill to the aid station. It was the same hill that beat me up before and it was still a grind but when I saw the aid station, I knew I made the cutoff and I knew I could finish the race. I had made it with six miles to go.

There were three of us left on the course. One guy skipped the aid station and cranked up the last 3 miles and down. The other guy and I hung out a bit at the aid station and refueled. We knew we could finish barring a crash and really, we weren't that far off from everyone else. There was a band in the park and beer and who would begrudge us a few minutes to rest. We took off. He dropped me and I had the questionable honor of chatting with the course sweepers the last two miles. They were nice guys and I did my best to put them out of their misery. I do think I got down the Larrison Rock trail faster than they thought I could. Thank my bike. They kept warning me to be careful but I found the descent just fine except that it was getting dark and, though I didn't think it was possible, it was raining harder.

When I say raining, I mean really hard. The forest canopy was keeping the worst off, but you could hear it. I thought there was a river running fast next to me. It wasn't until I popped out of the downhill (and you do pop out of it. Usually downhills taper off and you get some runout before civilization. This trail was crazy steep and you hit the flat fire road so fast it almost dents your front rim) that I understood how hard it was coming down. Think standing in your shower. Think "Caddyshack" during the thunder storm. One of the sweepers caught up to me on the road and we were just laughing at how bad it was.

He backed off as we hit the last quarter mile of trail to the finish. It was very thoughtful. It was my race. He let me finish it. The final hundred yards were on a paved bike path in the park that was the halfway point. By now the standing water was coming over my wheel rims. I could hear people cheering as I came into view. I had a finish like no other. I've never felt compelled to let go of the bars and pump my fists in the air at a finish but I did, and I know, I was DFL. Lantern Rouge, the reason why everyone was standing there getting drenched. But right then, it was so good. I did it. A bunch of people I didn't know understood how hard it was and what it meant, and they cheered me like Andy Schleck winning a stage at the tour. The race promoter was there shaking my hand. This pretty young girl in a poncho hugged me as I was walking away from the finish. She hugged me! This slow, muddy, spandex clad stranger. She had no idea who I was! I almost burst into tears. Without knowing who I was, she understood. It was absurd. And it was lovely, and it was absolutely in tune with how the last couple years have been. Getting cancer, turning 50, chasing a sport I love but seem to be condemned to compete in as an also-ran, the stupid, insane rain, through it all, being surrounded by the people I love, all of it had a finish, a closure, a happy ending. 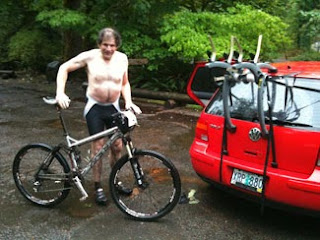 I keep wanting to tell people about this. About all of this. The bad racing. The cancer. The bag of urine tapped to my leg after the surgery. Smarter people than me keep telling me not to overshare, But I have friends not as lucky and I really want people to understand how precious this all is. This part of the story ends with me racing 55 miles and climbing, when it was finally figured out, 10,000 feet. I am strong. I am happy. I am loved and I am blessed. I have nothing to feel bad about. And I can't take any of this for granted. I want everyone to treat their lives the same way. There is so much joy in even the little moments. I might paint with a slightly bigger brush on the emotional canvas, but the small strokes are no less important.

And I'm really sorry about the picture. It's the only one from the race I have. We were all running around the parking lot trying to find a slightly dry place to change. The guy who came in ahead of me took the picture.