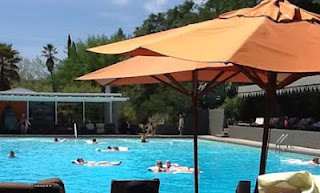 I've never done leisure particularly well. I've always equated leisure with doing nothing, and doing nothing sounds like... doing nothing. Life is measured by activity. If your entire life is defined by laying around like a spud, well, you might be happy but where are the high points? "Oh that day of laying around in May last year, that was a day to remember!" "Last Monday's sitting on my ass all day, that was the sitting on my ass of a lifetime!" I don't think so.
So it was with some surprise I found myself laying around by a pool at a spa in Calistoga last Friday. Carolyn and Anne were getting mud baths and despite Calistoga having an awesome bike shop, it was just far enough away to not make it worth walking to visit. So there I was laying in the sun. I read for a bit. I applied more sunscreen. Read some more. Watched the people floating in the pool. It was all very mellow. There were no screaming kids or dogs running around. Polite quiet conversation seemed to be the rule here. I liked it. It was civilized. I was finding new found respect for sitting on my ass.
After half an hour I was getting kind of warm so I decided to go float around in the pool for a bit. There were foam mattresses and ethafoam rods to use sort of stuck under your arms. People were just sort of drifting around, sort of the next level of lazy. You could swim of course but that seemed to go against the trend. I went over to the deep end of the pool near where the mattresses were, climbed down the ladder and let go.
A number of things happened at this point. The first was the realization that I hadn't been in water that was actually over my head in probably 20 years. This realization was followed almost immediately by my sinking without a trace. I could have sworn floating just sort of happened. As I was heading to the bottom, it occurred to me that the act of being a human being in deep water necessitates moving your arms and legs about to stay afloat. I was surprised I had forgotten that. I gave it a try. I still seemed to be sinking albeit a bit more slowly. I upped the pace. Better. I upped it again. It seemed to be working. I increased the speed and randomness of my flailing so by the time I broke the surface I looked for all the world like a non-swimmer in the deep end of the pool trying hard not to drown. My flailing had brought me near enough to a mattress to grab it and hang on for dear life. I calmed down and looked around. Nobody seemed to notice my near-death experience. Everyone was quietly talking amongst themselves or just asleep in the pool. Thank God for oblivious New Agers. I suppose you go to spas for personal growth, enlightenment, and healing. You don't go to pull drowning idiot programmers out of thermal pools. I'm OK with that.
I got myself over to the shallower section of the pool and did some proper practicing of treading water, dog paddling, and finally, a credible breast stroke, so by the time Anne and Carolyn returned from their mud baths, my dignity was restored and I was no longer a drowning risk.
I suppose learning that you've forgotten how to swim is a form of self-realization and quickly relearning that skill is a form of self-actualization. Not drowning is certainly therapeutic and I can say with confidence that I left the spa invigorated and happy to be alive. So I guess the spa delivered on its promises.
Next trip: mud bath. Or maybe I'll just walk to the bike shop.