Last Sunday was the 24th running of the Mudslinger down in Blodget. I show up largely out of habit. It's not a race I usually do well in. I'm not a good mud racer. It's early in the season, I don't have the miles in, blah, blah, blah.  Years worth of excuses. Suffice to say, I wasn't expecting much this year. The weather was awful. It was cold - snowing a bit when I got there. I threw on every layer I had and even strapped on a front fender which in the eyes of the racing style police is only slightly less tacky than tassels on your handlebar grips. Standing there in the rain, waiting for my wave to go off, I gradually shook off my attitude, relaxed and when the countdown reached zero, I clipped in and rolled.
It was the best race I've had in ages. Really.
It was the best for a few reasons. I didn't totally suck. I finished 8th out of 21 in my bracket. I didn't make any huge mistakes. I probably won't be sponsored any time soon but it was nice to be in the thick of it. I was climbing really well. I've been concentrating more on my pedaling and posture, trying to stay relaxed with a smooth cadence and it was paying off. I lost count of the riders I passed. I crested the first climb within sight of the front runners and closing. Yay me. 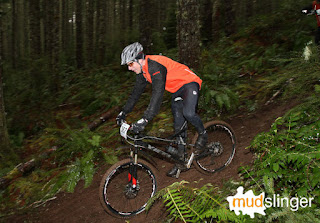 It was about this time the course turned downhill into the mud and roots and things slowed down quite a bit. A few riders got around me at the bottom of the first trail section. I held on to them as best I could. I'd close it up and then we'd hit another trail section and they'd pull away. I recognized Dave Hart and his daughter getting around me. The Hart family are sort of the Von Trapps of mountain biking. A huge, gifted family of bike racers. Well known around here. The nicest folks you could ever meet. Dave beat me by a couple minutes. His daughter beat me by a minute or so too. I remember being stuck behind her at Alsea a couple years ago. Now she's on the podium.
You might think that getting beaten by a teenage girl in a skirt (I think they're Mennonites) would take a toll on my ego. Truth is, I've been beaten by so many unlikely people over the years, it just doesn't rattle me like it used to. I've arrived at finishes to find people who looked like they just dragged their flabby asses off a bar stool for the sole purpose of arriving at the finish far enough ahead of me to knock back a beer or two before I arrived. I know I've said it before but it bears repeating: This is hard. Finishing is something to be proud of.
I know Cat 1 and 2 racers would smile condescendingly at my enthusiasm for the small amount of progress I've made in my racing over the years but consider this: When you are racing at the level of a Cat 1 or 2 racer, you have arrived. You will be spending most, if not all of your racing career clawing for increasingly smaller gains, mostly to hang on to where you were when you started there.You better find your happy place in that struggle.
On the other hand, in Cat 3, there's no place to go but up! And the field is way more interesting than the upper classes. By the time you've upgraded, you've got the gear, the clothes and probably the skills to blend with the pack. There's a kind of Mad Max quality to Cat 3. You see first time racers with body armor, heavy set guys with full face helmets, men and women suckered into their first race by their spouses, looking for all the world like "B" movie victims. You see guys in baggies and sneakers riding all mountain rigs, cyclocross bikes, even a bmx bike or two. A spectacular mash up of gear and clothes that was the summation of what people had on hand, what they thought they needed, and what they felt comfortable with. Move them up a class and they are just under-trained pack-fill. Right now they are beautiful and you will never see racers as happy and energized as first-time racers.
That said, I've been in Cat 3 too long. After 4 years, it feels a bit like being held back in the third grade for a few too many times. I'm not a first-time racer. I had thought I could work my way up to a solid podium finish but those places tend to belong to faster riders who come and go from this category. I think after this year it will be time for me to join the under-trained pack fill in Cat 2. As much as I enjoy the company back here, if you have a heart rate monitor, understand what over/under intervals are, and dream of doing a 24 hour bike race, it's time to move on. I think I'm OK with that.