Of Birthdays and Bees


Last week was my wife Carolyn's 60th birthday. These big landmark birthdays generally fill most people with dread. Who wants to turn 60? Who really wants to throw that party? Lucky for me we decided a few years back that we just can't do big parties out at our place any longer. the logistics are too complicated. We don't want people drinking too much and trying to drive home. We're lazy too. All good reasons. So I took the day off and we went to the coast. We had a nice lunch, did a little shopping, came home, opened a very nice bottle of champagne which was remarkably disappointing. Not to end the night on a sour note, we also opened a bottle of Cos Cerasuolo that was absolutely transcendent. We spent the evening talking about what it means to grow old together and lose most of your dignity in an unfortunate explosion of cats.

I need to back way, way up for just a second. In 2006 I started "Residual Sugar" as a wine blog. Carolyn was through the viticulture and wine making program at Chemeketa, we knew all these amazing winemakers who were just getting started and we were both looking for some way we could fit into that world. We planted grapes, helped at crush, worked on the  bottling lines, and I started writing about what we were drinking. Technically, residual sugar is what is left behind in wine when fermentation is stopped before the yeasts have consumed all the sugar in the grapes.  Some residual sugar is common in a wide assortment of mostly white wines.

Fast forward six years and the blog name seems kind of pointless. I write mostly about racing my bicycle. You'd think I could come up with a clever or at least relevant name for the blog that might reflect that. I've thought about changing it but all the clever bike blog names are taken (although it looks like "Belgian Knee Warmers" might be available.). No, the truth is, I kind of like it. It seems to hold meaning at a few levels even though we never turned into wine makers.

Saturday night we went in to Portland and had a small dinner party at Anne's loft. We talked about a bigger party and indeed, there were quite a few friends we wanted to invite. In the end we settled on a smaller sit down dinner and invited friends from the wine making days we hadn't seen in quite a while. 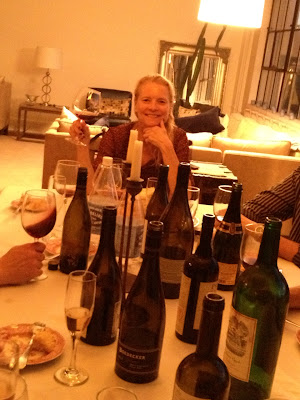 Beautiful wine was opened. Anne's neighbor Tracey brought a magnum of '94 Niebaum-Coppola Rubicon that was a trip back in time to a day when California reds were more refined and complex - not these high alcohol fruit bombs Robert Parker is so fond of. We brought a bottle of 2005 Stewart Boedecker Cellars Pinot which turned out to be a coup, as Stewart and Athena Boedecker were at the table with us and had sold out of this years ago. It was lovely and wonderful to see the winemakers proud of how the product of their labor had matured over time. Sean Driggers, the winemaker for Pudding River Cellars brought a magnum of Pinot Gris - one of only six magnums he bottled. Sean is one of the most gifted white wine makers we know and we'll drink his Gris before anyone else's. His Pinot is brilliant too but everyone had hit their limit before we could open that.

Carolyn beamed through the evening as everyone shared war stories of the early days of making wine and  the challenges of making and selling it now. We were reminded that half of wine is context. In our review crazed world, we've arrived at a place where we put a bag over a bottle of wine, line it up with a dozen other wines in a badly lit room and end up rating wine like a movie on Netflix. But wine is craft and people and it's consumption is best in the company of others. Wine is place and memory. Carolyn even refers to "memory wines" that customers ask for. They have a great bottle at a restaurant and want to bring it home and without fail, the bottle just isn't the same. Because she sells it for a living, much of Carolyn's context for tasting it is a loud crowded supermarket with distributors doing the pouring. Many of those distributors are great friends but the experience is not what dreams are made of. That night, she got back some of the passion you can lose when something you love turns into a job.

We got home Sunday afternoon and as we were moving things from the car I heard really loud buzzing. Looking out from our side porch, I saw thousands of honey bees swarming over our barn. We couldn't tell where they came from or where they were going but they were moving as a mass. We watched them as they drifted North and began to circle the old goat shed. Slowly, they moved into a knot hole in the side of the shed, taking up residence in an old nest that had recently been abandoned. Carolyn had been grieving the loss of our old nest all spring. We didn't collect honey from it. They were great pollinators though and we felt honored to have a wild nest of our own. We don't know where the hive went. One day they were just gone. So, nature gave her a better birthday present than I ever could have purchased. The bees are back in town!

All in all, things came out pretty well. Happy Birthday Darling!