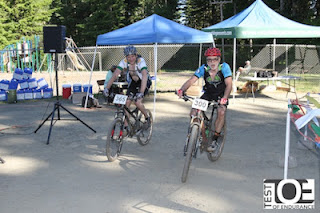 It's 8:30, the night before Pickett's Charge, the last race in the points series for the year. I need to hit the sack so I can be up at 4am for the 3 hour drive to Bend. But this has been sitting in draft mode for days and it's time I finished it.
Thing is, I'm having some trouble setting a tone for this post. Anyone who's read my blog for a few years (thanks mom) knows the Test of Endurance has been a sore spot with me. In 2010 I missed the cut at the end of the first lap on something of a technicality and was pulled from the race. It was a rainy, nasty and slippery day. I think I was the only racer to get pulled. It was embarrassing, and combined with the weather, it set itself in my mind as a dark, awful theatre of failure and despair. This year I'm lighter, faster and riding a better bike. It was sunny and the trails were beautiful. I hit it hard and finished the first lap 40 minutes faster than in 2010. 8 hours and 21 minutes later I rolled across the finish with my new friend Steve Cash who rode with me the last 10 miles or so of the race.  I made it.  I'm proud of myself for finishing it. So why can't I kick the bastard a little, now that I've beaten it?
That's the sticking point. On the one hand, there was a huge amount to laugh about in last Saturday's race and I promised myself I'd keep the tone a bit lighter this year. On the other hand, on the other... this race really hurt. It took an emotional toll two years ago because I couldn't finish it. It took a physical toll  this time because I did.
My goal was to finish the race and I accomplished that goal. There was also a small, hopeful part of me that wanted to do well. Not just finish but finish strong. But I blew up around mile 31, a replay of Fat 55 but this time there was no bailout. I knew what was happening and had packed enough fuel to recover and I was not going to throw this race! I walked, wobbled the six miles to the far aid station where I was able to stop, rest, hydrate and recover enough to finish. I'm frustrated that I can't dial in my fitness and nutrition on these long races. It's not like I just traversed the Antarctic alone, or rowed across the Atlantic. There were hundreds of riders in this race and most of them finished faster than I did.  I'm not sure it does my ego much good but many, many of them were not the kind of people who you might think would be particularly good at this sort of thing. If you saw us all milling around in street clothes someplace, you wouldn't look at that family and believe that father's 12 year old son and two teenage daughters, let alone the father himself would come in hours before me.  We expect 12 year old kids to have the edge on us in some things like computer games or social media. Those of us wading into our 50's like to think we carry a certain physical ruggedness with us that's been lost in this generation of flabby, media addicted kids with short attention spans. Then I see a 12 year old boy standing on top of the podium with his arms in the air looking absolutely predatory, or a teenage girl on the same podium as a result of doing what teenage girls are emphatically not supposed to be doing, and I'm reminded that the worst mistake we can make is to judge any generation, group, or sex, collectively.
And maybe that's why, despite my struggles with these kinds of races, I keep coming back. Endurance mountain bike races are rarefied things that attract a tiny cross section of people. As a result, it's hard not to be self conscious and self critical when participating in them. There is also something special about these events. On reflection, I can say it's true of any mountain bike race. Every one of us, no matter how we place, is an outlier. This, by most measures, is a stupid thing to do. After a certain point, it isn't healthy. Yet, there we are. I am humbled by the people I compete with. Whether they are faster than me (and 153 of 159 of them were on Saturday) or not.
I'll take that thought to bed with me and dream of a fast race tomorrow in the company of giants.