Fat 55 - All Your Races Are Belong to Us 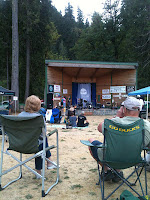 And in case you think that it was all wildflowers and puppies - well, OK, there were a lot of wildflowers and puppies - here are some other stats to ponder:
Along with being told: "The sex really wasn't that good", getting passed by a unicyclist within the first five miles of a bike race ranks among the most humiliating things I've ever experienced and having been through prostate cancer, I've pretty much sampled the entire buffet of humiliation and gone back for seconds. In my defense, he was a really fast unicyclist! He was very polite too. He would have been entirely within his rights to point out that, despite 27 gears and years of training, I had been overtaken by a guy with one wheel and one speed and perhaps I should consider adopting another sport that I might not be so unspeakably bad at and thus open up the trail for faster men, women, children, pets, and unicyclists. But instead he wished me well as he ran up the trail pushing his clown device ahead of him.

It's times like these you really have to dig deep to find your happy place.

But I do know how to dig that deep. I've learned quite a bit since I DNF'd this race last year. The first thing I learned: finish the damn race. Your eyes better be rattling in their sockets or your bike better be in several pieces if you're going to pack it in. The second thing I learned: It's a long day. Don't let a bad section get under your skin. The South Salmon Creek trail is hard right off the starting line and I had a bad time of it, crashing twice, losing a water bottle and having to spend 5 minutes fixing a bag that had come loose from my top tube. I was pretty far off the back when I exited the trail and hit the climb up the road to Heckletooth. But climbing fire roads is something I do all the time and do pretty well, so I settled in, found my pace and passed nine riders on the way to the first aid station. I was able to do this because of the third thing I learned this year: keep eating and drinking. I set an alarm on my computer to go off every 45 minutes to remind me to do that. I cut open all my Honey Stinger waffles and chews and stored them in a top tube bento box, that, aside from detaching from the bike and dumping all my food on the ground every 10 miles, made it really easy to eat while riding.

What a difference.  I thought you were supposed to suffer like I was over the past few years and other people were just better at sucking it up than I was. It's a miracle I've finished half the races I do! Last year, I pushed my bike over every single root that crossed Larison Creek Trail, about 2/3 into this race. You can't imagine how many roots cross that trail. It was four miles of sheer darkness. This year I rode almost the whole thing. Last year I pushed my bike up an exposed section of trail along a steep drop into the reservoir because I was afraid I would wobble and go over the side. This year I jammed up the same section so fast I clipped my shoulder on a protruding branch and nearly pitched myself over the side - which goes to show that feeling good doesn't preclude stupidity. Nevertheless, my head was clear. I didn't cramp. It was a whole different race. I was able to skip the last aid station on the paved climb to Larison Rock Trail. I was able to really take in what a beautiful, scary trail that is. Two years ago, I limped down this trail in a torrential downpour and barely noticed how steep it was, largely because it was nearly dark. This year I could clearly see it's a lovely sliver of a trail bench cut into the side of a mountain that's so steep, if I went off the trail, the sound of my screaming and my tumbling down the mountain would be loud enough and go on long enough that the band would stop playing in the park, everyone would look up at the mountain, and someone would ask for a moment of silence. 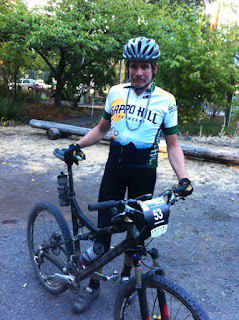 Few things in life felt as good as getting to the bottom of that trail and rolling the last bits of bike path over the river and into the park to a band, cowbells, cheers, and my ever patient wife, who, despite my last post about how boring mountain bike racing can be for spectators, really seemed to be enjoying herself. I finished about 40 minutes faster than in 2010. I wasn't last and I didn't feel particularly bad about that. My number plate turned out to be the same as my racing age, which was pretty neat too.

So, the mountain bike racing season came to an end on about as positive a note as I could hope for. Carolyn and I stayed the night in town, enjoying a few pints at Brewers Union that night and had a great breakfast in town before heading home to all the Fall projects we've been putting off.

A big thanks to Eugene Cathcart, the sponsors, the volunteers,  and the town of Oakridge for throwing such an awesome party. If you race, you should come do this! If you just like to ride, you should come to Oakridge and ride. Unlike Whistler or Moab, the Oakridge story hasn't been written yet. You should come here and help write it. It's betting on mountain biking to revive its economy and the whole town seems to be behind that bet. There's no other place quite like it.