Waiting is an odd state. It's inevitable, to be sure. We all have to wait for something or someone sometime. But it's the antithesis of doing and it's frustrating. A few weeks ago I competed in the Salem Short Track Series - pretty much the antithesis of waiting. Short track racing was a blast. It's very - concentrated, I suppose. The heats only last 20-40 minutes on a short 1 mile course. You pretty much go all out for the duration but you have to think all the time. You can't just put your head down and hammer.  There are tight turns, sudden climbs, drops off curbs, there was a bmx track involved. At one point the course went by some people playing bocce ball. I'm still not entirely convinced I didn't imagine that part. It was pretty madcap. No waiting involved. Pedal your brains out. Chat with other riders. Home for dinner by 7pm. A great way to spend a few hours on a Monday night.
But that was a few weeks ago. Once over racing sort of got put on hold until the Mt Ashland Hill Climb on the 16th of September. It's been hard to stay focused on riding. I kind of shifted into waiting mode. I've still been riding, but as the days got shorter, we began to look at the peeling paint on the house, the burnt out walkway lights and a few summer projects never started and I decided to take off the spandex and put on the tool belt for a few weekends. Not race training but at least I wasn't just sitting on the couch refreshing the OBRA calendar hoping someone would schedule a last minute race.

Then things got complicated again.

I'm sitting in the waiting area of the McMinnville hospital's ICU waiting for Carolyn to get out of wrist surgery. The metal plate installed following her wrist fracture in 2007 had abraded a tendon to the point that it snapped. They're removing the plate and hoping to repair the tendon. She wasn't in pain but her left thumb didn't work any longer. Very inconvenient if you hold bottles for a living. It really happened quickly too. We went from "I can't move my thumb" on Wednesday morning to "By honey! Have fun in surgery!" Friday morning. So here I sit. 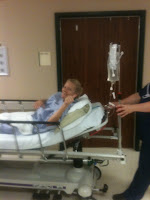 This might be the worst kind of waiting. This is a minor operation. The outcome will likely be a few months of limited movement and a few more bills to pay. But sitting in this room where countless others have waited makes me pensive and sad. This place is a condenser of anxiety. So much worry just soaks into the upholstery. While I was pacing the hall, escaping the noise of the tv in the waiting room, a woman walked by me and said "I know it's hard, but they're very good here." She knew. It is hard. You are powerless in this place and that powerlessness just adds to the sadness, the "what ifs" that fill your head when the person you love is being filled with anesthesia and getting cut into.

Cut to the following Tuesday: They had changed shifts at the hospital and the knowledge that I was waiting for Carolyn was lost in the changeover. Around 4pm Carolyn called me from the recovery room wondering if I was ever going to take her home. The operation was a success. She's in a splint for 4 weeks but should be better than new once it's off. A bit more waiting but all things considered, that's ok. Oh yes, she got to keep the metal plate they took out of her wrist. She's wearing it on a chain around her neck now. Thing probably cost more than a Tiffany necklace so why not. It's got a better story too.