Well, after a great race at Sister's Stampede, I'm back to sucking again.

I'm not surprised. It's been kind of a sketchy season from the beginning and the two weeks spent traveling to Maddie's graduation and visiting JD down in Oakland pretty much knocked me back to "strong but out of shape" status. Saturday I went down to do the Alsea Falls Switchback and let's just say it's a good thing I  have abnormally high self esteem.

I raced down there a couple years ago, the first time Mike Ripley used the area. I thought it had potential but it was a bit rugged and I crashed hard on one switchback. Since then, he's put a lot of work into the trails and significantly changed the course. It's much improved and should have played to my strengths. We raced 3 eight mile loops that began with a 3 mile climb on an old paved logging road. He started the race in two waves instead of letting each category go with a couple minutes between. I really liked that. It got all the fast people out in front and while the start was a bit of a mob scene, it thinned out quickly on the climb.

I didn't feel very good on the climb. I was a bit farther back than usual when we crested the climb and started downhill. Trying to make up time, I was rolling fast, maybe 50 yards behind a faster younger rider when I was rather abruptly reminded that the act of making up time usually means you have to give up something else, like your powers of observation, or your memory of the pre-race meeting when Mike was warning us about the water bars on this section. Drainage trenches across dirt roads are pretty common around here and somewhere in the back of my mind I was probably thinking I should be keeping an eye out for them. I figured I'd see this kid swing right and scrub speed to hit the ride-around when he came up on one. I didn't figure on his just flying over them. I saw him get a bit of air and I thought "Cool! A bit of  a berm to get some fun and safe air time after a long climb!" which quickly changed to "OH DEAR GOD I'M GOING TO CRASH SO HARD MY WHOLE BODY IS GOING TO EXPLODE AND MY HEAD IS GOING TO BOUNCE DOWN THE TRAIL WITH THE HELMET STILL ATTACHED!!!" as this hole opened up in front of me deep enough that they had to throw logs into it.

Fortunately, speed really is your friend and I did two things right. I didn't touch my breaks as I hit the ditch and I got as far back and as low as I could on the bike without letting go of the handlebars. I was carrying enough speed that, while I didn't clear the ditch, I hit the far side of it high enough to roll over it and I was, for once thankfully heavy enough, and far enough back that I didn't go over the bars. It did knock my chain off which I didn't notice for another half mile during which I was so amazed that I wasn't dead that I would have embraced any religion you placed in front of me. Then I noticed my chain was off when I couldn't pedal uphill and I was back to being bitter and self-pitying.

I didn't have any more close calls but I had lost momentum in more ways than one. As I started the second lap, the people I had been racing with pulled away. By the time I started the climb on the third lap I was racing alone. My teammates had finished the race and were sitting in camp chairs by the road drinking beer.

On the plus side, I had the course to myself so I actually got to enjoy the trail sections, especially the lower trail which was just so much fun.

As it flattened out at the bottom, just a few hundred yards from the paved road and the finish, there was a stream crossing with a mandatory dismount to prevent erosion. As I passed the warning sign for the dismount, I unclipped my left foot and twisted my right foot to unclip on that side.

I was still attached to the pedal.

I stopped and furiously swiveled my foot left and right trying to get the pedal to let go.

I stood there for a moment, trying to figure out how I was going to get across a stream and up the steep muddy embankment on the other side with my bike stuck to my foot like a really large piece of carbon fiber and aluminum dog poop. 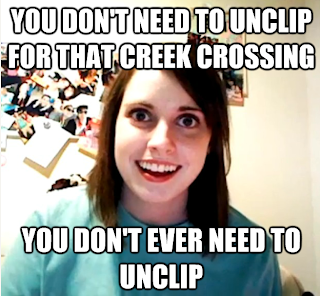 I kind of hopped to the stream edge. There were a couple of kids who had wandered away from the finish area watching me. I think they were really enjoying themselves.

I was so used to these pedal systems working absolutely flawlessly, confronted with a pedal that wouldn't release, I was at an utter loss. I finally decided this wasn't going to happen unless I parted ways with my shoe so I unbuckled it and left it dangling from the right pedal. I walked through the stream and managed to get up the other side with one shoe on. The kids were nowhere to be seen, they had probably fallen over in the bushes they were laughing so hard. I thought about trying to get back into the shoe but after 24 miles of hard riding and a near-death experience, I simply couldn't figure out how to do it. So I got back on the bike, clipped in with my left shoe and stood on top of my right shoe and pedaled in.

Bike racers understand the suffering of the last ones in. They respect the effort. They expect you'll be tired, gasping for breath, sweat soaked, maybe even bloody. They don't expect you to show up standing on your shoes like a deranged triathlete who was utterly unclear on the concept of the swim to bike transition. As I broke out of the trees and back to pavement for the few hundred yard climb to the finish, people clapped and cheered and I heard people say things like "Great Jo... huh?" and "You're Almost to the Fini...what the hell is wrong with your foot?"

I crossed the finish, trying to ignore the stares, and rolled back to the car. I was dreading the thought that I'd have to drive home with the bike on the roof rack with the damn shoe still attached to it. I flipped the bike over to see if I could unbolt the cleat. I could see that one of the two mounting bolts for the cleat had fallen out but I couldn't get a wrench in to remove the other one. Lacking any better plan, I grabbed the shoe and rotated it nearly 360 degrees. Somehow it created enough resistance to let the pedal release.

As I was driving home, I took some solace in the knowledge that even if I had a crap race, it was a crap race on some beautiful trails. I did get my shoe off the bike. That may not be as memorable as eating the greatest sandwich of your life, but it's certainly something. And as much as I might want to beat myself up for a bad racing day, even I had to laugh thinking of myself standing there with one shoe on in the middle of the woods.