Of Bike Races and Bees

As I look back on it, last week definitely ranked among the more surreal. It began last Saturday morning. It was the day before Pickett's Charge and I was looking forward to an easy ride, some wrenching on the bike and a lot of carbo loading ahead of the race. I came downstairs, made some coffee, sat down on the sofa and I heard the buzzing.  Yup. There were bees in the wood stove. Great. This has happened before. Scouts from a hive that's about to divide go looking for promising homes. Our chimney shows up quite a bit in their real estate listings. Some of them wander down the chimney and get stuck banging themselves against the glass of the stove door. I vacuumed out the bees and lit some paper in the stove to send a message up the flue that this isn't a good place to call home. That's worked fine in the past. The scouts don't come back and the chimney stays on the market. This time when I came back and looked, the half dozen bees had been replaced by a hundred. This meant the swarm was moving in and our chimney was about to become a hive. I cracked the door and tried my vacuum trick. A bunch flew in the living room. I chased them around with the vacuum cleaner. I stepped on one and got stung. I hadn't even had my coffee yet. This was getting out of hand.

I made my coffee. I Brought Carolyn hers and explained why I was vacuuming at 6:30 in the morning on a Saturday. I came back down and sat on the ottoman staring at the buzzing conversation piece that used to be our stove. I called a few beekeepers to see if I could get some advice. Nobody answered. I checked online bee forums for solutions. They said call a beekeeper.

I was pretty sure the swarm hadn't established a hive yet. The stove was empty last night (this happens to you once, you spend the rest of your life checking wood stoves for bees). I really needed to get a fire started in there before they got a comb going.  Carolyn suggested waving a propane torch in the firebox to chase them away. I figured that would just chase 100 flaming bees into our living room and that would probably end badly. It's at times like these that I'm reminded that country living can really suck. I finally settled on cracking the door and vacuuming the bees as they started to come out. This mostly worked. The few that got airborne went right to the living room windows where I could catch them.

I know bees are actually quite docile and we count ourselves blessed to have a hive in the wall of an old garden shed. But a honey badger, I am not. Letting bees into your house letting alone staring down a hundred of them with no protection but a Dyson with a crevice nozzle is a stressful experience. After a very adrenaline packed hour, I had the number of bees down to a point where I could open the door enough to lob enough paper and kindling and my last starter log into the stove and light it. When the fire was burning steadily I went outside in time to see thousands of bees evacuating the chimney. They hung around on the cap and the top of the bricks for maybe another hour. As I was watching them, I noticed the number of airborne bees flying around me was getting large enough to be alarming. I went inside just as the swarm detached from the chimney and spiraled down to cluster on a branch of a tree in our side yard. The swarm was about the size of two footballs - a big one, I think. They stayed there all day. I kept the fire going while we all pondered our next moves.

Finally, around five in the afternoon, they started to move. As nerve wracking as the day was, this was a spectacular sight to see. They had been hanging at ground level all day so when they took off, the air was filled with a cyclone of thousands of bees. A moving swarm of bees is absolutely fascinating. Like an alien from an old Star Trek episode, it's a conscious cloud that moves with purpose.  They know where they are going. It moved to the center of our field, then moved west. Then they were gone.

The bike race? It rained. I crashed 5 miles in. The whole Cat II women's field blew by me. I finished dead last.  I feel like I could copy and paste the last three sentences for most of my race reports for the season. I don't feel all that bad about it. Being beekeeper for a day on Saturday definitely took a toll. It was a tough racing day. It's a hard course that demands pretty constant attention. And I knew this year was going to be rough. It was. Off seasons happen. I need to concentrate on the whys not the results.

If I felt bad about anything,  it was that one of my teammates, Brian Ross, crashed hard warming up and had to go to the hospital. He'll be OK. He had a concussion, and did something to one of his knees. He's out for the rest of the season and he's pretty bummed about it. 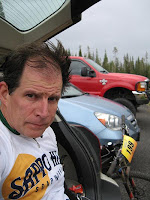 So as I tally the damage from the week, I'm left with one bee sting, some bruises on my left leg, a bicycle in bad need of some maintenance, and a vacuum cleaner whose insides are now coated in honey so it may be totaled. On the plus side, I learned I'm not allergic to bee stings (though my foot itched like crazy for most of the week). I didn't have to go to the hospital, and I am reminded that I should be grateful that I can still show up at the races even if I'm not particularly good when I get there.

Anonymous said…
I thoroughly enjoyed this story! I found it pretty funny and ,as a beekeeper, was impressed by Jonathan's grasp of the situation. As with so much in life, its helpful when one can be philosophical.
12:38 PM