We were in NY visiting family for a couple weeks. It was Carolyn's dad's 93rd birthday and a chance for me to spend a little more time with mom. Carolyn's folks live in Waterford, a small canal town at the intersection of the Hudson and Mohawk rivers. It began as a trading outpost of the Dutch East India Company in the late 1600s. It's one of the oldest continuously incorporated towns in America. That's a remarkable thing considering its penchant for burning down and/or flooding. My in-laws have left their home in a boat more than once. My mother lives about 70 miles south on 16 acres  up in the Catskills. It's Washington Irving country and a favorite subject of the Hudson River School painters. There's a sort of haunted quality to these places; a feeling of a past that doesn't want to let go to an encroaching future. 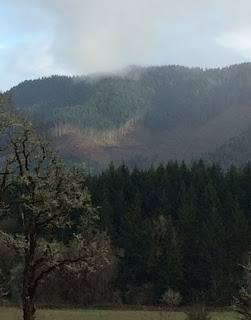 It's a feeling that resonates more this trip since they've begun clear cutting a large part of the mountain range across from our house back in Oregon. We've known since we moved here this was going to happen. In fact, it's been happening the whole time we've lived here. It's just been our luck that the cuts have been below the treeline of a small ridge that separates Finn road from Gooseneck road or they've been blocked by some of our larger trees. This one goes all the way to the ridge and we can sit in bed and watch it grow while we have our coffee in the morning.


I'll miss what had been a pristine view, but I admit it doesn't upset me the way I thought it would. I've ridden through those mountains for so long now that what they are is as present as what they look like. The truth is, there is nothing pristine up there. Every tree as far as we can see from our house has been planted to be cut down.  It's an accelerated process that's informed every place I've lived. When I walk through the woods at mom's in the Catskills, I walk over old stone fences that tell me these woods were once open fields. Bike races in Bend and Corvallis change yearly as trees are harvested or burned. It's nice to look at the mountains and see them as reassuringly permanent but what happens on them is most certainly not. 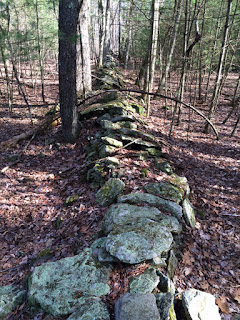 Clear cuts aren't beautiful like an old stone fence in a forest. They're blunt scars from a distance and when you stand in one, the feeling is similar to standing in an empty lot where an old building once stood. There's the ugliness of loss and shards of what once was. There's also a sadness in knowing it will take decades for that place to return to a semblance of a forest.

But you get used to it. The cut gets softer as brush grows in, new trees are planted, and debris decomposes. If you're paying attention, it also makes you look more closely at what you've taken for granted. Though I don't ride through this new cut, I certainly go through plenty of others. On my last few trips I began to notice seasonal waterfalls I'd ridden past for years but never really noticed. 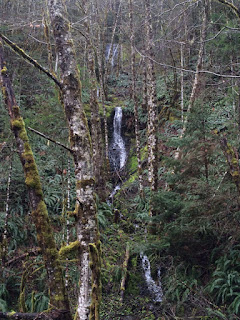 These go away too, when the mountains dry out. But for now, they are lovely and largely ignored.

It's a good reminder that we move through time as well as place. Beauty is a function of both of those things. We can remember that as we look at the growing bare mountainside.