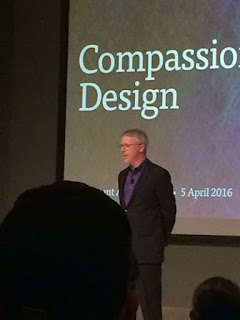 I attended An Event Apart up in Seattle last week. It's a conference for web designers.  I apologize to my friends and especially my nephew Kyle for not looking you up while I was there. It was two very intense days - think 10 TED talks in a row on web design. It's not my usual HiEdWeb conference. That's a great one but I needed to change things up. This fit the bill. There wasn’t much free time; but I also just needed some time alone to think.

I’ve been writing the eulogy of my professional life for the last year or two. At 56, most of my working years are behind me. There’s no time left for a career pivot. Nobody’s going to hire an old school webmaster in their mid-50’s. What I do is being distributed among specialists now anyway. Nobody needs someone who can do a bit of css, a bit of php, some design and a bit of copy writing. That’s a recipe for mediocrity.

Also, I have back hair. I’m fat. My knees hurt. It just gets worse from there. I can feel myself sliding back to the swamp of self pity where I spent most of my high school years, college years, and about half of the ’80s. I thought it would attract girls. Mostly it didn’t work and as Carolyn has correctly pointed out, I don’t need to attract girls anymore.

She’s right of course but I’m not entirely wrong about my work. Ten years ago, a company website was pretty much the sum total of an organization's digital presence. Now that presence is so distributed, most people can’t tell when they’re using web resources. Apps pull web data. Websites populate from databases that may or may not collect data from web sources. Data aggregates so quickly and in such volume that applications can collect and push data without human oversight. What we have, what we see, changes as a consequence of parameters being met in an algorithm. It’s overwhelming and it’s hard to see how a single person matters in such a world. Last week I was reading a comparison of web frameworks (don’t ask) and the editor calmly informed me that, because of a particular Javascript library the framework used (don’t ask about that either) you needed to provide your own transpiler to edit it.

I don’t know what a transpiler is.

I entertain thoughts that nobody knows. It’s just a word the author made up to mess with me, but in my heart of hearts I know it’s a thing. It's a thing supported by dozens of people half my age who are absolutely sure what it does will be a game changer. I don't want to change games. Everything I read that’s work related makes me feel like I’ve had a stroke and the resulting aphasia turns words to gibberish. Why? Why did anyone feel the need to come up with a word like "transpiler"? All I can think of is a compiler in drag. How can anyone do meaningful work when people mangle the language of your craft with words like that?

And that’s what sent me north. I wanted to find out if I was right. I wanted to find out if I really was done with this. This was a conference hosted by the luminaries of the web. My thinking was, if I sat through two days of web design workshops with the same kind of dull incomprehension that I sat through 4 years of high school Spanish, I’d know it was time to pack it in.

Of course the strangest things happened.

On the train north Sunday, I was checking Facebook and Julie Chaves posted photos from the Beaver Freezer Triathlon. She and her daughter did it again in memory of Julie’s daughter Carin who died 3 years ago. It brought me back to that terrible sad time and the strange, giddy offset of doing that race with the family in the cold and rain, just a few months after she died. So I started the conference thinking about loss.

On Tuesday, Eric Meyer did a presentation on “Compassionate Design”.  I have 3 of his books on writing style sheets for the web. He’s a personal hero and I was really looking forward to hearing him speak. When he started speaking, he proceeded very quietly, to show us a picture of his daughter, and to describe the circumstances of the picture, her surprising willingness to be photographed, and the cancer that was, unknown to him, developing in her brain, and then he told a room full of engineers, writers, designers, and programmers, that she died 15 months later before she was 10 years old. And I joined everyone in that auditorium feeling the collapse of everything that seemed important; brought to that place of unimaginable loss. And Eric then showed us his Facebook page from shortly after her death and the picture of his daughter that Facebook had posted on his profile, surrounded by dancing cartoons and celebratory clip art and the horrible insensitivity that a piece of software exercised during a time of grief.

He spent the next hour telling us how important we were; people were, in a process that’s been cutting us out of the equation.

It would be a lie to say I left the conference totally recharged. In most ways, I left as befuddled as I arrived. I still don't know what a transpiler is.  I learned I don't have to use SASS to precompile my style sheets and Bootstrap is a great tool for prototyping but you should never go into production with it; which is a relief, I guess.

A long time ago I listened to the Web Director from Virginia Tech talk about disaster response during the massacre there. At the end of his presentation he broke down and sobbed in front of 400 web professionals. Years have passed and I think I had forgotten what that meant. As I took the train home I thought about the strange bookends of tragedy that framed the weekend and no, I'm not recharged but I know this: I'm not a ghost in the machine. I'm a person in the machine. I have that. I'm not done yet. There's still work I can do.

Unknown said…
Beautiful blog. You, Jonathan, are the heart built from decades of experiences. You bring the compassion that young people have yet to personally experience. You are a very important cog in the machine: the humanity part.

You always can publish something http://www.write-an-essay.org/college-paper/
absorbing that does not waste minutes of your life like what you see on countless other sites. This is very interesting and I will be back for more. Thanks for sharing
7:08 AM