Before you start feeling sorry for me for huddling in a tent in the snow, I should point out that Carolyn and I have spent quite a few years camping and decided that we will never again go down on our knees to get in a tent. So when I say I was in a tent, it was a 6 person Big Agnes with a wool kilim on the floor, two cots, a camp chair, mood lighting, and expedition grade sleeping bags. It was tall enough to do jumping jacks in. So "huddling" meant I was sitting in a chair reading and I had to turn the heat down at one point.

Still, at 3am I turned the heat back up and there was ice on the tent walls. It was cold out there! I got up at daylight, suited up and went outside. I turned over the car and it told me it was 15 degrees out. Nice.

Despite the amenities, doing anything in that cold takes more time. I made coffee, ate breakfast, got my kit on, scrapped the rime ice off my bike and barely made it to the 9:15 race meeting. The sun was out and any pretense that this was a normal race was swept away as Mike, the race promoter told us he had shortened the course by 3 miles, added warming stations and warned us there would be a lot of walking the first lap as the course had 15" of snow at the top. I made a last minute wardrobe change and ditched my bike shoes for insulated Merrels and heavy wool socks with plastic bags over them. Yes, I'm 58 and I was wearing boots with plastic bags, just like 4th grade. It's funny the life skills we bring with us over the decades. The only down side was I was wearing regular boots on XPD clipless pedals which were about the size of ice cubes and after like 30 seconds of riding were literally ice cubes. I had to stop several times to hack off enough ice to get my feet ot stay on them.  The struggle keeping my feet on the pedals eventually contributed to back pain that shortened my race but with frozen feet the alternative, it was the right choice.

As Mike was counting down to the start, I was reminded of a Jenny Holzer  truism: "Expiring for love is beautiful but stupid." I used to have that printed on a t-shirt. Now I was living it.

The race began with a short run to our bikes followed by a pretty scary section of icy parking lot and then we hit the snow.

A few fat bikes (mountain bikes set up to run 5" wide tires) had run the course so there was a trail to follow. I was surprised at how rideable it was. Maybe 60 of us were in the starting group. It thinned out pretty fast. The first half of the main climb was actually easier than in the summer with the rocky sections smoothed over by snow and the traction actually very good. Below freezing, snow behaves a lot like coarse dirt and  even with narrow tires, I could climb.

The top of the course was miserable. Deep snow and too broken up to ride through for very long. Fortunately, Mike and re-routed the course so the last few miles followed fire roads with well established tracks in the snow. It was a pretty fast run back to the park.

The second lap was great. The top of the course had packed down and the whole lap was rideable. Well, it was rideable for a good rider. I fumbled a bit in a few sections but it was actually fun. I was reminded of the sled runs we made on dirt bike trails in the woods when I was a kid. It was like bobsledding through a forest. The track was banked and maybe 18" wide. I wasn't sliding around. The tires were sticking and amazingly, I wasn't cold. Anyone you talked to would tell you it was the hardest 7 miles they ever rode but it certainly wasn't the worst, at least for me. 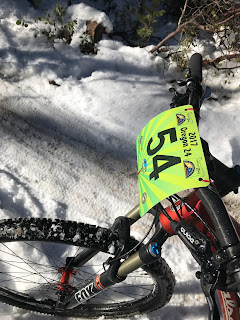 Carolyn hadn't checked in yet so I set up to go out for a 3rd lap. It was about 2pm and I was feeling pretty good. While I was getting some food and changing gloves a woman rode by my camp sliding all over the place. She looked strong and I couldn't figure out why she was having so much trouble on the trail I just flew in on. Then I got back on my bike and promptly fell over. It had moved above freezing and the whole course had turned to slush.

It was horrible. Even the fat bikes had to walk sections. Two hours later I wobbled in having crashed half a dozen times. My back was a mess from all the twisting trying to keep the bike upright and keep my feet on the pedals. By the end of my 3rd lap Carolyn had arrived and with just a few hours of light left I decided I was done. By 5pm most of the field had resigned. Mike decided to call the race at 12 hours so all the 24 hour riders got rolled into the 12 hour results. I was dead last in the 12 hour 50 - 59 category. I'm not sure how many of those were 24 hour riders.

I've come in last more than a few times and I've felt bad about that but not this time. I mean, yeah, I wish I'd beaten somebody; it is a race, after all. But this one was such an outlier. Half the registrants didn't show up. Those of us who did shared an experience like no other. Through the whole race, there was always this detached part of my mind thinking "Huh, this is really happening." Nobody, I mean nobody thought "you should have tried harder" about anyone out there. Almost everyone was struggling with what they didn't have. People on fat bikes and an advantage. People with flat pedals had an advantage. People with proper winter riding boots had an advantage. People who weren't 2 months into their recovery season had an advantage. Heck, people with RV's and support crews had an advantage. I don't think that was the point anymore. To jump on your bike and head off into the mountains in those conditions was an act of incredible collective courage and stupidity and we all shared that until we were done.

As the night fell, Carolyn and I were snug in our tent with our new friend Mr Heater, sipping a nice vermouth and listening to the dozen or so riders left on the course fly by as they clocked laps to the 10 pm cutoff. The course had frozen up again and it was fast. I heard riders spinning their cranks as fast as they could, or the buzz of their Chris King hubs as they coasted by our tent trying to make the cutoff. I would have just been in the way out there. I had my moment and I was grateful for it. Last year I got on the podium but I felt like death at the finish. This year I got to have dinner with Carolyn, who, by the way, actually had a pretty good time for someone who never had winter camping on their bucket list. I also got to drive home without having to pull over to sleep.

I'm pretty sure Mike doesn't want to repeat this race in the snow but I'm also pretty sure there were more than a few people out there who would show up again if he did. 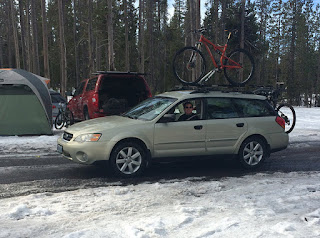