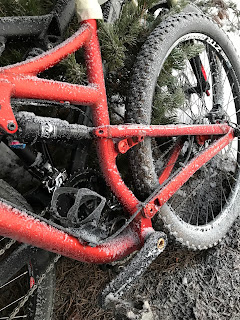 It’s been a while since I’ve done a race report. It’s been a while since I’ve done a race. Carolyn and I were in Hawaii during the busiest part of the racing season. I can't say I felt bad about that. Last weekend was the Oregon 24 and I did line up for it and I did get some laps in but I’m not sure this will qualify as a race report because I’m not sure the Oregon 24 qualified as a race this year; at least not for me. It was certainly something. It may be the most memorable “race-like thing” I’ll ever do. Simply showing up for the race was more memorable than quite a few races I've finished.

The whole thing started evolving to what I showed up for a few months earlier when so much of the state caught on fire that they had to move the race up another month to let the smoke clear. I wasn’t wild about the change. Mike used to do the race in July. Saying July is my month of “peak fitness” might be a bit of an exaggeration, it is at least the month of my peak “least out of shape”. Every subsequent month is a month of decline into someone more closely resembling a pudgy guy who spends about 60 minutes a week on a stationary cycle at the gym. I had some reservations about putting my holiday physique through a race but I’d only done one race this year and I just couldn’t end it at that. I was honest enough about my fitness to sign up for the 12 hour race this year instead of the 24. I figured it would be cooler, and hardly any guys my age signed up for the 12 hour race last year so I actually thought I could win my category.

I really thought that. That’s so cute.

Two weeks before the race I began to track the weather in Bend. Everything seemed fine until the race weekend moved into the 10 day forecast. There it was. The temperature was going to plunge and it was going to snow. This isn’t really unusual in the West, but my New York mind was a bit put out. I mean, I can’t recall a single Halloween in my childhood when I had to trudge through snow to get my candy and Halloween was still two weeks away!  I didn’t panic. I’d raced in snow before; at least I’d raced when it was snowing. It was lovely and settled the dust. How bad could it be?

As it turned out, really, really bad.

The first indicator was the little red triangle that shows up in my weather app when the national weather service thinks something bad is coming. It was announcing 11-15” of snow in the Cascades. “Well,” I thought “I’m not racing in the Cascades. I’m racing in the Eastern foothills of the Cascades so that should knock off 7 or 8 inches right there!” I was skipping over the fact that the race took place in the Wanoga Snow Park and the Park Service generally puts snow parks in places with lots of snow. It’s called “planning”.

The drop in temperature did concern me. The the nights in Bend were going down to the low 20’s and the race was a thousand feet higher than Bend. I was going to be in a tent and it could get down to the teens and I was going to die as soon as I tried to change out of my sweaty bike gear and apply 20 degree chamois cream to my crotch.. More importantly, Carolyn was meeting me at the race on Saturday. Carolyn hates the winter and her coming all the way to Bend was the sweetest thing she could do and I couldn’t imagine leaving her in camp with no heat besides sitting in the car or dumping me for a Motel 6. This was serious. This was “I need to throw money at the problem” serious.

One trip to Buy Mart later and I was the proud owner of a “Mr Heater” indoor safe propane heater and an adapter hose to connect it to a 20lb propane tank. I figured 9000 BTUs should keep me comfortable, or at least warm but paranoid. Open flame in a nylon tent has filled me with dread since my high school winter camping days. Seriously, I actually skipped my Junior Prom to go winter camping in the Catskills. I didn’t date much back then. That fear wasn’t unfounded but when I weighed the options, freezing to death was a near certainty while burning to death in a 2000 degree ball of melting nylon was more of a preventable possibility.  Mr Heater had all kinds of safety shut offs. Besides, there was a picture on the box of the heater in a big tent with children and the kids on the box looked happy enough.

Friday morning I packed up everything warm I owned, two bikes, a ton of food and headed out over the mountains to Bend. As I went through Salem I stopped at Lowes and bought a scoop shovel in case there really was snow in the snow park.

There really was snow in the snow park. A lot of it.

It was, in fact snowing as I pulled in. Massive RV’s with generators roaring filled one parking lot. Sprinter vans with awnings and fire pits filled another. The few people I saw looked like they were getting ready for a summit attempt on Mt Everest. The solo rider camping area along the course was deserted and the road was covered with about 8” of snow. It was about as un-mountain-bike-racey a scene as I could imagine. I plowed the Subaru up the road and pulled in to what turned out to be the only shady campsite in the entire snow park. When the sun came out and I saw what I did I told myself it was snowing so how was I to know but honestly, after so many scorching hot days racing in that park over the years, I think my sub conscious just defaulted to shade. 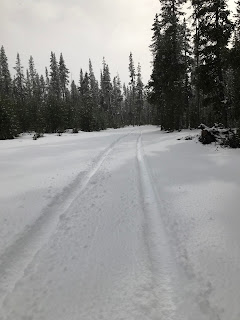 I had about 2 hours of daylight left so after high fiving myself for buying that shovel (being a solo, self-supported racer can on occasion, be a little physically awkward), I got to work digging out a campsite. It didn’t take long to clear the site but I discovered the snow had come down so fast, the ground was bone dry and dusty where I removed the snow. I actually tried putting back some of the snow I removed to settle the dust until I realized I was behaving like someone who needs counseling and gave up.

As the light faded and the snow tapered off, I tossed my gear in the tent, fired up the heater and settled in for the cold night ahead. This was already epic and the race was still 12 hours away! 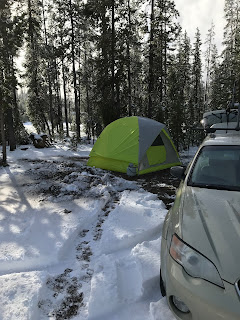