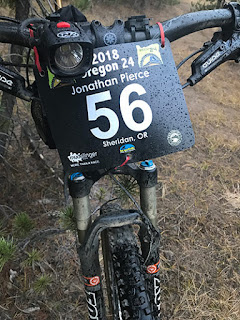 After almost 10 years of writing about the mountain bike races I do, I understand that by now, writing a detailed description of each race I do is pointless. I'm doing the same races I've done for years so the descriptions are largely the same except that I seem to be getting a bit worse at them each year and even at my best I was never good enough to add the necessary excitement to them to make them worth reading. Reading about someone who repeatedly comes in last is a bit, um, demoralizing.

So why bother writing about them at all? More to the point, why do them?

I was thinking about that as I started out for my last lap of the Oregon 24 last Saturday night. I was only doing the 12 hour race this time. The last time I did the 24 hour race two years ago I made the podium but it was the first time I felt something had gone really wrong with my body by the finish. Last year I intended to do the 12 hour race but it snowed 15" and it was crazy and actually kind of fun but not really repeatable. This year I almost didn't do it at all. It's been a year filled with life changes that made racing seem trivial in the scheme of things. I wasn't trained for it. There was plenty to do at home too.

Old habits do die hard though. I'd done it the previous 4 years and skipping it felt like giving up. I wanted to do it too. It was - familiar I guess. I've never covered the same ground with the detail I've covered that race. 34 loops over the same 11 point something miles of trail above Bend. The whole idea sounds horrible to most people. To me it was soothing. I've come to accept that boredom combined with complete physical collapse is my yoga. I think it's too late to work on that.

I wasn't just noodling around out there, mind you. You can't phone the race in. Barring a couple sections, it's not that technically hard, but if you let your attention wander, you'll hook your handlebar on a tree or overcook a corner and down you'll go. I did my laps aware not just of the course hazards, but also how my body was feeling and how the day was progressing. I was watching for rain and gauging my lap times against oncoming darkness so I'd be dressed for rain or cold when it arrived. There was a detachment in the whole experience that left me with a bit more self awareness and the chance to think (a lot; it was 12 hours) about choices and purpose and in some odd way, what makes me happy (besides boredom and physical collapse. That's just fucked up.)

Carolyn took a pass this year. She suffered through the snow of last year and being a race widow is not her thing. I totally get it, especially with solo riders. It's amazing how many people will show up to support them and I know they have important reasons for being there. Carolyn was just a text away so she was never far from me. I'm so grateful I have someone in my life who's proud of me, regardless of whether I win or lose and knows me and trusts me enough to let me wander off and do this alone. Maybe that's age. Maybe that's understanding what's important.

I'm quite slow now. I know I've said that before but it bears repeating.

I am very polite though. Nobody gets out of your way faster than I do. I don't mean that as a self-effacing humblebrag. The truth is, when you're doing a multi-lap race, you are going to be overtaken by faster racers. What you do with that truth says something about you. I was a sprinter in high school. That's a race to a line and you are confined to a lane. Faster racers don't have to get around you. Though it's different in a cross country race, in a long game, I gain nothing by holding others back. When we are generous to others we own something precious of a shared moment.

And there's the race. There's the physical challenge that doesn't seem so tough the first lap or two but wears you down after half a dozen. There's the repeated landscape. It sounds terrible to describe but it's strangely soothing going over the same ground again and again. I think about it differently as the day wears on and the light changes. It's so familiar but it won't let me take it for granted. I have to be on for the same thing again and again. And when it's dark and I'm running lights, it is so strange. It's exactly the same but rendered in black and white in two dimensions where the shadows move and have the same visual weight as the trail and trees and rocks.

When I do this, everything else stops mattering. When I detach from what keeps me awake at night, and this year that's been a lot, there is a peace.

There are also cramps. And fatigue. The dust fills the lungs. There is also the primal fear of the night. Go ahead and laugh but I've seen stronger riders than me consumed by abject fear of what's going on in the darkness beyond their lights.

But past that, there is a mind focused on little else beyond why all the fast riders overtake me in steep technical sections, or why the cramps have to start on that series of 3 switchbacks right before I top out on the course. I think about whether I should have changed my socks last lap. That's more important than anything to me in that moment. Politics doesn't matter. Work doesn't matter. Impending old age doesn't matter. The neighbors don't matter, the check engine light doesn't matter (it probably should). Now matters. Nothing else. By the end of the race when I called it after six laps, I was in pain. I was nauseous. My legs were knots. My lungs were full of sand. I knew I had nothing else to give to that race, which was slightly sad considering how much more other solo riders were giving. When I was younger I might have cared but I'm older now. Their walk is not my walk. I don't know what they carry and they don't know what I carry.

Also, I had apparently taken 3rd in my age group. Cheers to "slow and steady"!

Duane said…
As I use to say to my kids when they would put their hearts and bodies into a similar effort "Good job!".
6:53 PM