On the afternoon of June 28th, after cleaning up the house in Dundee, loading our new gigantic  cooler with ice and consulting our maps. we started our drive from our old home to our new home.


I was going to launch right in to the travelogue post but the whole thing kind of veered off because of a question that needed to be answered: Why did we leave?  We know why we go on vacation, or to the store, or to visit family. Why did we quit our jobs, sell our home of 18 years and leave the state we've lived in for over 30 years?

I suppose we left for the same reason most people leave: the reasons to leave outweighed the reasons to stay. For some it's a better job. For others it's love. For too many,  it's fleeing violence or famine. For us it was well, it was for less dramatic reasons.

Growing up in New York, I always understood America as a journey from East to West. When I was in high school I rode my bike from New York to South Dakota; a peculiar swath of America but enough to see the great Plains open up in their ramp to the Rockies. I went to school in Colorado and finally saw those mountains. Eventually I wound up in Berkeley, spending a year interning at Berkeley Rep. I saw the Bay. I saw the Pacific, and I saw my home for the next 30 years; at least the southern Palm tree filled part of it.

I remember the drive a year later from NY to Oregon, through the snow, over the Rockies, listening to Malcolm McLaren and Thomas Dolby over and over on a boom box next to me in the cab of a woefully underpowered U-Haul van. I remember sleeping at a rest area a few hours from Ashland. I remember having breakfast that first morning at the Ashland Bakery and Cafe, now long gone. I remember how much I loved the place and how I thought I could never live anywhere better. It was true.

I remember meeting Carolyn there a few years later. I remember the night we had dinner together, a few months after she learned Lisa and I had broken up. I remember our one night stand that went on and on and continues to this day. I can look over my shoulder and see her 32 years later and I know the gift that Ashland gave me.

But we got restless and moved to Portland because it was undiscovered country and new and interesting and and it was a chance to make something new at Portland Center Stage. And we settled in to our 5th floor walk up for $325 a month (utilities included) and we were there as Portland became a thing. We were there when Bud Clark was mayor. We bought a house for $48,000 dollars. We made friends we still hold close. We saw the potential city and we were there when that potentiality was made real. We couldn't imagine leaving there.

But after after 13 years we got restless again. We weren't using the city like we used to. The noise bothered us. The traffic bothered us. My mother had just built a house in the woods in upstate NY and sitting on her porch one afternoon we decided the country life was what we wanted to pursue. Within a year, we had sold our Portland house and left for our life on Finn Road.

We lived there for 18 years. Those were years of great power for us as we made that house and that land our own. It took all the skills we had acquired over our lives to make it work and it was as close to a dream home as we thought we would ever have. I remember the sunsets. I remember the years I spent riding my bike around those mountains. I remember Carolyn telling me how happy she was I brought us there

And I could say we couldn't imagine leaving, but that wasn't true. In the back of our minds, we knew we couldn't stay. We didn't have a clear picture of what the next step was but we watched our neighbors Walt and Ester try to age in place and it didn't end well. That began to frame the future for us. We were so much younger but as the years wore on it was getting harder to take care of the place. And the place was wearing on us. Carolyn was sick from all the pollen and forest fire smoke. We were strung out from the continual gunfire all around us. Our neighbors had a motocross track. Honestly, I didn't really mind the motocross track that much, but if the neighbor's motocross track is the least of your worries, you have a lot of worries.

Appropriately, the solar eclipse in August of 2017 was the sign that change was coming, though it didn't feel it at the time. That afternoon during that strange post-totality hangover, I helped scatter the ashes of Walt and Ester on their property. I hugged my friend Nancy goodbye not knowing that would be the last time I would see her. 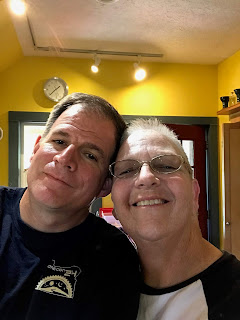 Within a couple of months Carolyn's parents would crash into nursing care and our attention would turn East. In the following year Joe died and my sister moved back to NY. Maddie settled in Colorado. Much of the reason for us staying in Oregon would be gone. Our lovely home couldn't offset the weight of time. When Linfield offered me an early retirement package, the signs were pointing in a very specific direction.

So here we are.

There is life and there is where we live it. Carolyn and I are carrying on much the same as we always did; we make ourselves at home. We talk about where we are. We get our hands dirty. It doesn't matter if we're in Oregon or NY or Sicily or anywhere. We've always done this. But before we got here we had to get here. We had to touch the country again.  Which we did.