I have a pile of fragments that have never seen the light of day. I found this one I probably wrote back in May.

"It's been some months since we decided to pull up stakes and move back to NY. I haven't written as much as I thought I would. There's a bunch of half finished posts. Even more half finished thoughts that never made it to the keyboard. I'm sorry about that.
Mind you, there are a lot of stakes to pull up in unexpected places. We're still pulling them up and I've learned it's hard to write about something when you're doing it. There's no perspective. Our days are filled with little revelatory things. Inching out on the roofer's scaffolding to lean over and paint the top trim on our house I realized I'm growing afraid of heights. That was revelatory. Not a whole blog post of revelation but I'm afraid most of the rest of the trim will remain peeling for the sale."

It did. Nobody noticed.

Of course now we're done "doing it" so it actually is getting a bit easier to write about it.

So, we had to move our two cars east and the dregs of our material world which consisted of some camping supplies, the clothes I needed to finish my stint at Linfield, my laptop, the last bits from my office, and a chainsaw inexplicably. Carolyn's sister flew out with her so the three of us could rotate driving. We were slow-boating through the West to make some stops in places that meant something to us, or where we had friends, or there was a hot tub.

Amazingly, everything fit. I bought a roof bag for the Subaru. That held most of the camping supplies, pillows and other soft goods. The chainsaw and my laptop made the trip behind the passenger seat. The monster cooler never moved from the back of the car. Carolyn and Janet rode in the Mazda with their luggage and a smaller cooler bag.

Our first day we made it 50 miles to Hood River. That was intentional. Half the day was spent cleaning up Anne's house at the vineyard so we knew we wouldn't get far. We paid our respects to Multnomah Falls one last time and found a nice place to stay in Hood River. 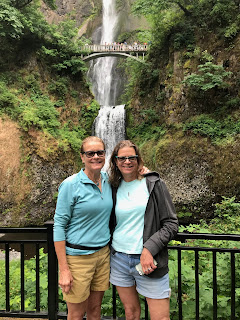 The next day we stopped at Maryhill Museum to drop off a donation to their collection. We've had an original program for the Theatré de la Mode for maybe 20 years. We had no reason to keep it and they were happy to have one in English. The museum is as strange and wonderful as we remembered it. We hadn't been there in 20 years.
From there we poked our way south and east stopping in Baker City Oregon and Winemucca Nevada. Winemucca turned out to be a blast. We left the morning of the 4th of July and were trapped by the 4th of July parade which blocked the Interstate ramps. We just stayed at the gas station we had filled up at and watched the parade go by. There wasn't much as floats go but you couldn't beat it for fun. It's basically a half mile long rolling water fight. Trailers of kids would hurl water balloons at the crowd and the crowd would throw them back. Every time a trailer passed a motel, all the kids would jump out and jump in the pool, then get out to run and catch up to the trailer.
The parade wound up and we climbed in to our cars (soaking wet).  That night we stayed in Ely, Nevada. It's the last big town before Great Basin National Park. There were fireworks in the distance and great Mexican food in the most nondescript former fast food restaurant just across from the motel.

The next day we drove to Great Basin and hiked up to the Bristlecones.

This place... This place has always held us. Back in 1989 or 1990 we stopped there and hiked from the Wheeler Peak campground to the Bristlecone pine grove a few miles up the side of the mountain. Something about the 3000 year old trees and the stillness and the isolation of the island ecosystems of the Basin and Range country just worked its way in to our souls. Over the years we came back and climbed most of the mountains in the park and visited other groves of trees. This trip should have been easy except the snow pack was the heaviest in decades so it was slow going. It was worth it. We took our picture under a 3200 year old tree in 1989 and we got to do it again. 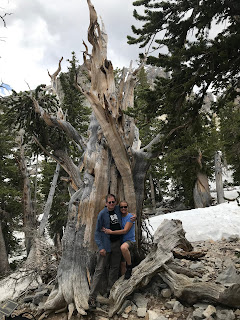 It hadn't grown much though it does have a plaque now. I thought we should have one too.

We didn't stay in the park. It was the shoulder of the 4th of July weekend and the few places to stay in Baker (population 50) were booked up. We could have camped but the three of us made a kind of awkward volume for even a big tent. We decided to stay in a cabin about 30 miles up a dirt road from the park. The somewhat terrifyingly named Bates Ranch turned out to be perfect. It was clean and quiet and we had the honor of taking a tour of the Crystal Ball Cave. The Bates family found it back in the 1950s and have been the caretakers of it since. It's halfway up Gandy Mountain a bit into Utah.  Our guide was the grand niece of the gentleman who found the cave in the 1950's.
The cave is undeveloped. There are no lights and it's a quarter mile hike up a steep trail after several miles of dirt road to get to it. It's about a half mile long walk through the cave. It's unusual in that it spent a good deal of time filled with water when this was all inland sea. That caused crystals to precipitate out of the water giving the cave the feeling of being in a giant geode. It had stalactites and stalagmites too.
It was an honor to tour the cave, and to talk with Mr Bates back at the ranch. We occupy different worlds, but for a day, standing out there in those mountains that never gave all their secrets away, thinking about the years we walked through them and simply felt the power of that place, we felt the years and the time and the strength we carried that let us see their beauty and we got to see it again one more time.

Antelope ran with us through the brush as we drove back down to Route 50 to make the 90 mile desert run to Delta Utah which was the first stop back in the busy part of the West. We finished the day in Park City at Anne and Chris' condo for a few days of mountain biking, sight seeing, laundry and a last few precious days with friends we loved in the west we loved before we pushed east to our new home in New York.