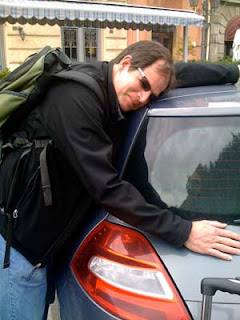 We circumnavigated Sicily by car going counter-clockwise. The theory was we would lose less time transferring between train or bus stations and having the car to stash things in would save our backs. We'd also have more flexibility to make spontaneous changes to our itinerary.

It kind of worked. I suppose the aspect of our plan we didn't really think through was - in order to drive around Sicily, we actually had to drive around Sicily. This means engaging with Italian road culture which has more in common with a first person shooter video game than what most Americans would recognize as driving. If I can impress any single thing on you with regards to driving in Italy, it would be that the rules of the road - all the rules of the road - are like the Pirates Code: they're more like guidelines. Speed limits? How fast does your car go? Lanes? What's the point? Turn signals? Just leave them on, eventually you're going to do something.  Stop signs? AH HA HA HA!

I should also mention tunnels. They love tunnels in Sicily. In the US we just blow up mountains and create cuts for roads. In Sicily, they raise the roads on viaducts and go straight through the hillsides. I'm guessing it's a holdover from Roman aquaduct days on the mainland. This would make for pretty fun driving except that lots of these tunnels have no lighting at all. We went through 8Km tunnels that were pitch black. That's a whole new level of darkness. Your car lights illuminate the tunnel immediately in front of you but it's all black rock and asphalt with no lines, so you're just staring into blackness looking for cracks in the road to give you some clue that you're still pointed in the right direction.

If this makes you think that the roads in Sicily are some sort of Mad Max dystopian nightmare, you'd be partly right. What keeps it from being total chaos is the sort of counter chaos of pedestrians, cyclists, mopeds and livestock that also occupy the roads. Since insane drivers and insane pedestrians are usually the same person at a different hour of the day, there's a strange balance to the whole thing. Drivers will scream around blind corners and swerve around who or whatever is in their way, but they do it as an aspect of the normal routine of driving. Americans would understand those things as obstacles, as disruptions to driving. Americans on American roads will scream at, and occasionally shoot at, anything that slows down their race from point A to point B. Cyclists fear for their lives on American roads. I can actually buy a cycling jersey that says "Don't Run Me Over" on the back. In Sicily, chain smoking old ladies dressed in black have just as much right to the middle of the road as the guy in the Alfa Romeo. It works because that lady might be the mother of the guy in the Alfa. They understand the road as part of the community space as opposed to the US where we see roads as part of a personal relationship we have with our cars. Obstacles in the road interfere with that relationship and make us mad.

There are aspects to driving in Italy that make this relationship easier. Many roads simply don't have lines, so you have the whole road to work in. This is good since the concept of shoulders seemed to have escaped the highway planners. Cars are smaller too. It's way easier to not hit something in the middle of the road driving a Fiat 500 than it is in a Ford Excursion. Those Smart cars might look dorky in the US but in Agrigento they look like two more feet of clearance on a street that a donkey would have trouble navigating without scraping its sides.

Yes, there are accidents. We saw a goat get hit by a truck on the way out of Gela. Most Italians, especially in towns say good-bye to their mirrors pretty early on in the relationship with their cars. But I can't say it's any worse than America. Nevertheless, it's stressful if you aren't born to it. Since my mother had the good sense to teach me to drive a stick, Carolyn spent much of the trip cringing in the passenger seat while I attempted to not kill the flora, fauna or ourselves getting from one place to another. I only made her scream once, so I think I did pretty well. The fact that the mirrors were intact when I dropped the car off just reinforces that opinion. We had this adorable Renault diesel that was fast as all get out with the added bonus of looking like it was wearing a bustle. I'd buy one if they sold them in America.

The unintended consequence of adapting to this style of driving was that it was emotionally exhausting. What time we might have saved skipping the trains we probably lost slumped in a bar drinking negronis trying to calm our jangled nerves. We tended to drop the car at our destination and go out of our way not to drive it until we absolutely had to. As much as I loved that car, I was happy to drop it at the airport and take the train back to Palermo. OK, we went to a bar and had negronis anyway, but we were much, much calmer.