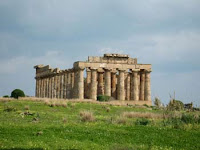 Selinunte is on the south coast of Sicily, maybe 40 Km west of Agrigento. Like most destinations on the island, getting to it is a run through pretty unremarkable country. We always think that beautiful destinations are like climbing mountains. The closer to your goal, the more beautiful the surroundings. The truth is, most of these places are surrounded by the unspeakably ugly, the byproduct of people profiting from beauty.

Selinunte is a long gone Greek city. A bitter rival of Segesta, the more photogenic ruin up north. You'd probably hate this place. The ruins themselves are pretty, um, ruinous. Close to the ground, shall we say. A couple of renovated temples, but mostly piles of bigger temples laid low by time, earthquakes and Saracens. Add to that, minimal services, bad lighting and a kind of seedy neglect and you have a recipe for a sad scenic destination. I can say with great certainty, it was our favorite stop in the Greek ruin department. 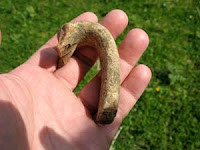 There's a joke about native New Yorkers. You can always tell them apart from tourists in Manhattan because they're the ones who are looking down at the sidewalk while the tourists are looking up at the buildings and stepping in dog shit. Carolyn and I tend to look down when we travel. Grass, rocks, trash, the details of where you are that are different from where we come from fascinate us.  Selinunte is a slice of archeological/historical heaven for people like us. It's one of the largest archeological sites in Europe and it's empty. The archeologists went home. Their digs are filled with sheep. Bits of the past crunch under your feet as you walk around.  They really do! I found the handle of a Greek vase on the ground. Probably 2000 years old. Just there. It felt like I found a Picasso in the attic. There it was. It was laying in an abandoned dig. It had been raining for days before. It was the rare time when it would be on the ground before the sheep ground it to powder. I picked it up - the first time it had been used for its intended purpose in two millennia. A piece of garbage, really. But still, it had the power to punch through thousands of years and remind me that a person, long dead, had crafted it, had believed in Zeus with the passion to raise temples large enough to shame our mega-churches. Someone who loved, lost and turned to dust as we all do.

Maybe this gets a little closer to why every time we describe this trip to people, it sounds like it was a disaster of a vacation, but we feel more moved by it with each passing day. This was a vacation under the skin.