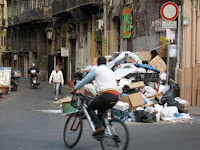 I don't want to give you the impression that Palermo is full of garbage. Wait... Yes I do. It is. Actually, much of urban Sicily is. Several odd things happened as our trip progressed. Our already tentative Italian got worse and we began to photograph the garbage we had been stepping around for two weeks.

On the one hand, it's horrible. It smells, it's ugly. It feeds rats. It means you have to walk in the street. On the other hand, you do feel like nobody is going out of their way to make the place look like something it isn't.  You know you are welcome in a home where people know you well enough to not bother vacuuming before you drop by. Or maybe they just don't care. Or maybe they do but the vacuum is broken. I think the last one is maybe closest to the truth in Sicily.

The problem has been around for quite awhile in parts of Italy where Camorra or Cosa Nostra have strong presences - mainly Naples, Southern Italy and Sicily. I found blog posts going back to 2000 commenting on it. Naples' garbage crisis made international headlines last summer. Basically, the garbage hauling companies are broke. The profits from their contracts that should go to paying haulers goes into someone else's pocket. So the haulers refuse to work and the garbage piles up. It's probably the most obvious artifact of endemic criminality you'll find in Sicily.

You can't not think about the Mafia when you are in Sicily. Everyone tells you it's not a problem for tourists and that's very true. But the simple fact that EVERY travel guide and most web sites tell you this means you're left thinking about it. Every unfinished building, empty tourist information booth, abandoned archeological dig makes you wonder if organized crime had something to do with its condition.

We tend to think of crime, especially Organized Crime as a set piece. It's populated by people who made a conscious choice to join the forces of evil. In America we buy guns to protect ourselves from the "bad guys" who might break into our homes, workplaces or classrooms. I think we really buy them to reinforce our belief in the "others" who might hurt us and to divorce ourselves from them. As long as they are "other",  they are not us. But that's not really accurate. Criminality often begins as a way of coping with a world that doesn't work for you.  If you feel yourself a victim in a society that does not serve you, you find ways of taking care of yourself and those around you who share your victim status. You also try to retaliate against that status. I have neighbors who regularly throw garbage out the window of their trucks. I don't know why. Maybe some kind of petty rebelliousness? It's a minor criminal act. Is it the same as skimming profits from a big hauling company to the degree that the company can no longer pay its employees to pick up garbage? I actually think it kind of is. At its root is the abandonment of civic responsibility in favor of individual need. You can certainly make a case for doing it - shoplifting food to feed your starving children is the classic example. It's still a criminal act.

I suppose I'm rambling on about this to try and figure out why the garbage didn't bother us that much in Sicily. Maybe it was because it just a particularly obvious manifestation of something we all live with no matter where we come from. Criminality really begins at home.

I know. We really did have fun and we didn't spend the whole trip staring into the abyss.