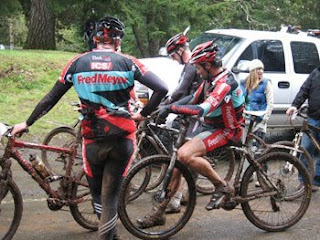 The Mudslinger has a bit of sentimental value to me. I think it was the 3rd mountain bike race I did back in 1988, the first year they ran it, I think. I remember my rear derailleur fell apart a couple miles into the race. I managed to find all the pieces and get it together again but I finished pretty far back. I did the race quite a few times after that and it was always a good time.

The Mudslinger is appropriately named, to say the least. We arrived in rain, rode in mud, and departed in more rain. It was also more fun than I had any right to have the day before a biopsy. I had done this course before, maybe 12 years ago. Familiarity takes some anxiety away. I started fast on the fire road but slowed down after maybe 3 miles to conserve some energy. This time I was riding better. After five or six miles, you start to get a feel for descending in slippery mud. It probably has more in common with snowboarding than cycling. It's counter-intuitive but going fast seems to help. It's slick but if you hold your line, you're ok. It's when you slow down, try to change lines and start adding lateral motion that things get messy. The first muddy downhill totally threw the Cat III riders. I went down in traffic, landing on several women with a third landing on top of me. It's not as sexy as it sounds. The woman who landed on top of my totally dropped me after a mile or so and went on to win her class. 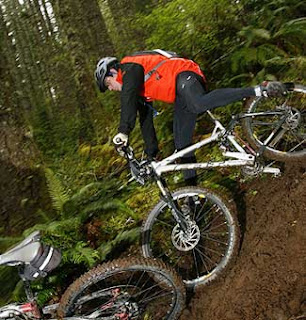 Once I got a feel for it, I actually started to race for a change. I was pushing, reeling in a few people and ended up in a dual to the finish with another guy in my age bracket. I'd drop him on the downhills and he'd reel me in on the climbs. Unfortunately, the race finished on a long climb so he pulled ahead with a mile to go. I tried to hang back and look beat so he'd slow down in hopes I could sprint at the finish but he knew what I was up to and kept hammering. We both dropped two riders sprinting to the finish. Beat me by 20 seconds. We shook hands and wound up having a great conversation about being older and still racing. We spent the next hour or two sitting on the floor of the Blodgett elementary school gym while they handed out awards and did the swag raffle. I scored a great riding vest worth twice the race registration fee so I came out ahead.

I kept commenting to other racers during the race that the course was very "educational". Tomorrow promised to be educational as well, in that getting large things shoved up your ass kind of way.