Sunny, warm, Saturday was perfect for racing! We piled into Mallory and Joe's Westy and headed down the hill to the starting line. The Spring Thaw is a pretty big race, drawing around 400 riders from around the Northwest. Saturday is the cross country, Sunday the Downhill. Cat III riders were off first. Mallory, her friend Amy and I lined up toward the back of the pack of 61 riders. I notices the woman I was riding with yesterday was lined up close to the front, which surprised me. She was certainly fit, but lacked the sponsor jersey or demeanor of someone who expected to win. She was wearing a simple blue jersey you might wear on an easy Sunday ride. Definitely didn't make a statement.

We had agreed to run our own races today but starting next to my sister seemed important. We were, in the end, doing this together, whenever we finished. The clock started and off we went. There's always a few seconds of standing there if you're in the back, waiting for the pack to get rolling. It was a clean start with no crashes and we were on our way. 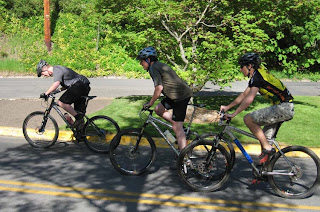 I tend to roll up to speed pretty fast so I broke to the outside and picked up positions pretty quickly finding my pace. I can lock off the suspension on my bike for climbing so I wasn't losing too much energy to suspension bob. I couldn't see Mallory so I just kept the pace up. The pack began to stretch out and we hit dirt. A few hundred yards later we cranked around the switchback and started the long climb to White Rabbit.

The first climb is steep and unpleasant and generally separates the leaders from the rest. I had caught up to "the woman in blue" and briefly passed her but she held on, and surprisingly passed me and began to pull away. Not by much. Ten, fifteen feet. There was something about her breathing that worried me. It was hard but not labored. She was climbing efficiently. I held on as we dropped a few more riders but she was hanging on to the lead pack of ten or so riders and I was slipping back farther. A quick check over my shoulder and I could see a few riders hanging on to me but they didn't look any better than I felt so I just kept the rhythm up and tried not to lose too much to the lead pack.

Cross country racing is surprisingly quiet. More so on climbs. The bikes are silent, no freewheels whirring. Just the sound of people breathing - hard. Last year I sounded like I was having a siezure all the way up the road. It wasn't a race as much as it was punishment for 12 years of ignoring my body and drinking too much. My nice was riding next to me, not sweating, not breathing hard. She asked if I was ok at one point. I think I managed "I'll live..." which I didn't entirely believe.

This year I was riding a race. It hurt, but it was manageable. I found myself thinking about the paradox of being so fit while carrying this disease that, left untreated, would kill me. I felt strangely detached from my life as it had been. On the heels of being told I had cancer, I was adjusting to the idea that I now owned the suit I had been trying on those months running up to the call from my doctor. Now I was adjusting to the feeling that I had stepped through the looking glass, the analogy made more palpable by all the trails around Ashland being named after chapters in Lewis Carol books. It had been just over a week since I received the call. It was so close. I know, the call didn't give me cancer. It was just informing me of a condition I have had for sometime. But still, my world was one way before that call and I could see, feel that world. Now it is something else. It will always be something else. But I have this. I have this hill, these strangers and family who are joined in this pointless act of mutual suffering. I know I'm not alone in having cancer but I'm also not alone in this race, and right at the moment, brings me more peace than I can describe.

Whereupon a man who looks older than me pedals by on a Giant bike wearing a Felt jersey and catches up to the woman in blue who's just swinging on to White Rabbit. He has a jersey with my bike brand on it and he's passed me!

White Rabbit is a short hop (sorry) up to Caterpillar. It's maybe a quarter mile but it ends in a steep headwall that's just the last thing you want to see after four miles of climbing. I ground up it and pushed a bit knowing it flattens at the top. I could hear people behind me groaning and dismounting. I figured I had shaken that group. It's not so much that you're riding any faster than walking, it's more the transition between the two and the loss of rhythm that costs you time. I couldn't see the lead pack so I picked the pace up through a gentle downhill trail through the trees, taking advantage of the smooth trail to flick on the suspension and dial out the front forks to pick up an inch more travel and a better downhill position on the bike. When I popped back out on the fire road I could see the lead pack had stretched their lead by another 100 yards. I could only hope they bogged down on BTI. I figured the woman in blue couldn't be much of a downhiller. She was petite and didn't have the scuffed up look of someone who isn't afraid to push the ragged edge on technical descents.

I crossed back on to the caterpillar trail and after a short climb, started the downhill run to the finish.
I was starting to get the hang of the switchbacks when a Team Pistis rider roared by me. Pistis is a huge team of Evangelical Christians from Grants Pass. Big crosses on their jerseys. A bit ostentatious for my tastes, but hardly out of line compared to the rest of the garrish bike jerseys out there. Their mission is to "deliver the gospel of Christ through cycling" which seems a bit like delivering the gospel of Christ through pie fights. I mean, it might work. It just seems a peculiar vehicle. They've always been friendly and there sure are a lot of them. Lord knows, they're fast. This guy either really sucked on the climbs or was sidelined with a flat. Either way, I wasn't going to touch him. I wish I could have hung on to his wheel just to watch his technique on the descent but no luck.

Down we went. I hopped back on to the fire road from Caterpillar and picked up some speed. Passed the turn to White Rabbit and dropped on the the dreaded BTI. The dreaded BTI actually starts smooth, fast and fun with a beautiful little jump that even I can get both wheels in the air on. Strangely, I was riding alone between the lead pack and what passes for a peloton in mountain bike racing. I was flying as fast as I could on the top section where the trail flows better. There's actually a line of crushed granite you can follow in the trail that represents the best line throught the gnarl. Just hang on to it and don't look down. The bike will carry you through it. The only real close call I had was long before the hard stuff. The line I was following ran up the side of a large rut and decayed into a pile of sand. The front wheel washed out and if I had been going any slower, I would have crossed up the bike and endoed. As it was I was going fast enough that I just slid out and the bike surfed up the other side of the rut and I popped out unharmed.

As I got into the steep switchbacks, I was actually feeling better than yesterday. I kept my ears open for anyone coming up behind me but I seemed to have the course to myself. I wasn't riding brilliantly but I wasn't horrible. I dropped through the switchbacks without putting a foot down. Rolled over the braking bumps and hung on through the doubles. There were all these absurd signs stuck in the ground asking riders to not skid. The intent was good but this was a race. We were going to skid. You couldn't avoid it unless you slowed way, way down which sort of defeats the point of a race. There was one last obstacle. A nasty right switchback that dropped hard on the exit. I had sessioned it yesterday and couldn't figure it out. I think you just had to hit it fast, go in low, rail the rut at the bottom of the arc and keep your momentum. If you went high and steered down it, your front wheel fell into this drop with your weight off to the inside and down you went. As luck would have it, there was a rider stalled out in the middle of the turn. I went high and stopped as there was nowhere to go, sort of dog paddled around the turn, yelled "On your left" which startled the rider enough to pause and let me by. I put the hammer down and flew the last few hundred yards. As I was turning on to the fire road for the last mile or so to the finish, I was stunned to see a rider pull up on my right. I actually said "Woah! Shoot!" and stomped it. I had a race to the finish on my hands! I flipped off the suspension, threw it into high gear and got as big a head of steam on as I could trusting that once I got my doughy computer programmer mass up to speed, Newton's first law would do the rest. I broke on to pavement and kept the pace up as hard as I could. I crested a short climb on Granite Street and turned on to Lithia Way. I passed the fountain on a fast downhill to the finish, passed Carolyn and Maddie cheering me on and crossed the finish.