I didn't Photoshop this... 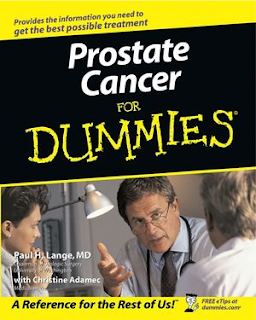 If I see a copy laying around the operating room, should I be worried?

I'll be honest; I've always hated these books. It's not that the content is bad. It isn't. They can be quite useful. And if you're starting from zero trying to research prostate cancer, I would be doing you a disservice discouraging you from buying this.

It's the packaging. "Prostate Cancer for Retards" wouldn't be any more insulting. The base assumption that we're all stupid really gets on my nerves. People with prostate cancer aren't dumb any more than people who can't figure out pivot tables in Excel are inherently dumb.

These books came into being as a sort of wink and a nod resource for people not baptized in the fire of technology to help them get by in a world that they find foreign. I get that. The chapters led with a funny comic that touched on the topic at hand. I can't imagine what the comics would look like in this book. Have you been to the Dummies website? There's a Dummies book for everything from breast cancer to high cholesterol. The concept of "Mixed Martial Arts for Dummies" keeps me warm at night.

Cancer is life and death, like lots of other diseases and challenges that have "Dummies" books written about them. I'm troubled by the idea that you can frame terminal disease, mental disorders, obesity, the real, life threatening challenges people face, with the same logical framework you apply to figuring out software. I won't die if I don't figure out pivot tables in Excel. The decisions I make around my cancer treatment have no similarity to the decisions I make with regard to the software I use.

People who buy "Dummies" books are often on their own. No expert to help them figure things out. Cancer isn't like that. This is a process with lots of people informing you about your condition. I don't think any doctor is going to go ahead with any treatment if they aren't convinced I understand the options. And unlike software, I can't lock myself in my office and "figure it out". This is less of an intellectual challenge and more of a ride I wound up on. The resources I use to research my decisions regarding my treatment shouldn't be in a bright yellow book with the word "Dummies" on the cover. Fuck, anyone diagnosed with a disease like this deserves more respect than the cover of this book bestows.