Last weekend we grabbed the big book of cancer, loaded the Golf and headed off to Bend for the Pickett's Charge bike race. It may be the last race I can do before surgery and we needed to go find some sun in the Oregon high desert.

I shouldn't feel as good as I do about beating a 12 year old kid in a bike race but when you're 49 with prostate cancer, you take your glory where you can. I think he beat me at Spring Thaw too so it's high time he learned that payback's a bitch. Get started on that lifetime of disappointment early! I did feel a little bad. He was working hard and reeled me in fair and square on the twisting single track. He did have an annoying trick of yelling "On your left!" as if he was going to pass and I'd look back and he was like 50 feet behind me. I did finally let him by when he actually was on my wheel but he just didn't have the body mass to brute force his way up some of the tricky rock gardens so I ended up hanging on to his wheel through the twisties and when we broke back out on the fire roads, I just threw it on the big ring and got my flabby computer programmer ass up to speed and, leaving technique behind in the woods, just mashed gears like a gorilla to the finish line.

I was a good sport about beating him. I didn't pump my fist in the air and scream "IN YOUR FACE!" when he crossed the line a minute later. I thought about it. But it was pretty obvious that nobody else at the finish would be joining in my little testosterone party, particulary at the expense of a kid who hadn't gone through puberty yet.

Truth to tell, it wasn't my best race. I raced this course last year and it was a blast. Not hugely challenging but fast and fun. I finished 5th in my bracket and had high hopes I could podium this year. Unfortunately, the course was changed a bit so it was shorter and more technical and the class I was riding in had grown to include riders down to age 35 so it wasn't going to happen. Worse, I was late to the staging area for the start and ended up way in the back of the pack when the race started. I probably lost a minute or two just standing there waiting to start pedaling and then having to play catch up to get up to the front pack. I ended up 11th out of 26 riders. Still, 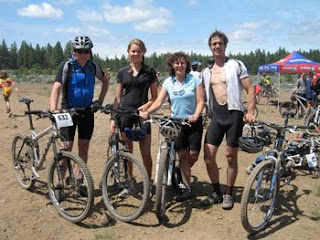 you couldn't not have fun riding the course. A long ride out on a fire road that returned on lovely slaloming single track through the pines with some challenging rock gardens.

This was a real family outing with my sister, Joe and Maddie all racing and Carolyn along for support and to celebrate her birthday. We spent the previous day pre-riding the course and wandering through shoe stores in downtown Bend on a quest for sandals for Carolyn. We had a birthday dinner at the Pine Tavern. Joe made drinking a pint of beer and a glass of sauvignon blanc at the same time look quite normal.

It's hard for me to describe what a wonderful family unit we are on location. Joe and Maddie keep the general tone of behavior slightly sub-teenage. Mallory cringes but is really proud that 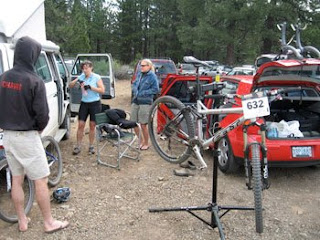 After we all crossed the line, we retired to the camper van, popped the top, put the Pet Shop Boys on the ipod (We're riding around in the woods in tights, what else are we going to listen to?) and drank Coronas and a fine 2005 Scott Paul Pinot Noir out of dixie cups. Maddie took a first in her age bracket and while we cheered her on, Joe through pebbles at her. We really need team jerseys. This is what the good life really, really is.