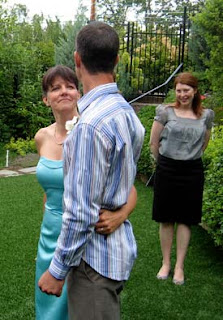 After 18 years together, my sister and Joe decided to get married. It's been a subject of some discussion why two people, with a 14 year old daughter and a comfortable life that suits them, would embrace the crusty old social convention of marriage.

It's a fair question. I haven't asked them directly and I don't plan to. There may be some practical reasons involving inheritance or medical visitation. Carolyn and I married after 15 years together. The impetus was her COBRA running out but that was probably more of an excuse than a reason. The thing is: we were married. In some way, after a decade or two, living together becomes the crusty old social convention and marriage starts to look like the new frontier.

What does it mean to marry after so many years together? Weddings traditionally are the send-off to a life together. A collective well wishing for a future of happiness. Everyone holds their breath and hopes it all works out. About half the time it seems to. A wedding after years together feels more like a celebration of accomplishment. You earned this party. This union doesn't feel right; it is right.

I know there are those who think marriage is necessary for the well being of the children, indeed that it's the primary reason for marriage. My niece gave her parents a wedding card that said in essence "I'm not really clear why you're doing this but I love you too much to care." She is walking, talking, amazing proof that marriage has nothing to do with the well being of a child. Loving parents engaged with their child have everything to do with it.

Maybe we should turn this institution on its head. Maybe the proof of love in matrimony shouldn't be how big a diamond you buy or how many people show up for the ceremony, or how big the cake is. Maybe the proof of love should be a decade of fidelity, sharing, loving, suffering, and growing as a couple. Maybe people should earn their weddings.
Labels: marriage sister